The AYA Neo Air is a handheld gaming PC with an AMD Ryzen 5000U series processor, Radeon Vega graphics, and a compact design. With entry-level models weighing less than 400 grams, the AYA Neo Air is lighter than a Nintendo Switch.

It’s also the first modern handheld gaming computer to feature an OLED display. First unveiled earlier this year, the AYA Neo Air is now up for pre-order through an Indiegogo crowdfunding campaign with early bird pricing starting as low as $499.

That starting price represents a $50 discount off the expected retail price for a model with an AMD Ryzen 5 5560U 6-core, 12-thread processor featuring Radeon Vega 6 graphics, 8GB of RAM, and 128GB of storage. With just a 28Wh battery though, this model is only expected to offer around 1 – 2.5 hours of battery life.

Higher-priced configurations come with a 38 Wh battery for additional run time plus higher-performance specs including support for up to a Ryzen 7 5825U 8-core, 16-thread processor with Radeon Vega 8 graphics, up to 32GB of RAM, and up to 2GB of storage. But those specs will cost you: top-tier configurations sell for $1249 and up. 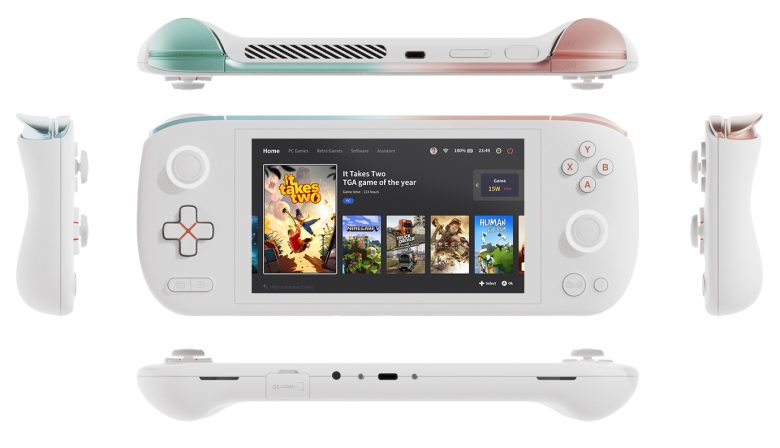 All models feature a 5.5 inch, 1920 x 1080 pixel OLED display, support for WiFi 6 and Bluetooth 5.2 wireless connectivity, a microSD card reader, 3.5mm audio jack, and USB Type-C port. And all models have a set of built-in game controllers, a fan for active cooling, and Windows software with a custom user interface focused on gaming (although AYA also plans to release a Linux-based OS called AYA Neo OS).

AYA offers a bunch of different pricing/configuration options for the AYA Neo Air. Here’s an overview, although I left out some of the special edition color options like the B.Duck Yellow and NES-inspired “Retro Power” designs just to save space:

And when it comes to AYA’s roadmap for the coming year, the AYA Neo Air is just the tip of the iceberg. The company also plans to launch the bigger, higher-performance AYA Neo 2 and AYA Neo 2 Geek, the entry-level AYA Neo Air Plus (which will sell for $249 and up), and the AYA Neo Flip and Slide with unusual form factors.

They’ll go head-to-head with other current and next-gen handheld gaming PCs from companies including Anbernic, AYN, GPD, and Valve.