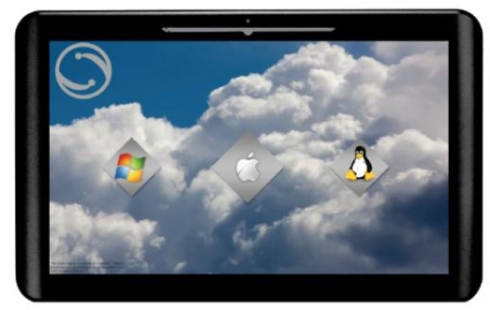 Axon Logic is a Pennsylvania-based company that plans to bring a touchscreen tablet to market. Nothing too out of the ordinary there. But what makes the Axon Logic tablet different is that the company is specifically targeting users that want to install OS X on a tablet.

OK, they’re not coming right out and saying that — at least not anymore. But they do point out that the hardware and software are all designed to make it easy to install any operating system based on Darwin, which includes OS X Snow Leopard.

When Axon Logic first introduced its tablet concept a few months ago, the company was talking about shipping it with OS X installed. At the time, I was told the folks at Axon Logic was reaching out to Apple to try to avoid the sort of legal smackdown that Mac clone makers including Psystar had suffered. Their hope was that since they were producing a device that was unlike anything Apple was currently offering, maybe they could get away with preloading OS X. No such luck.

In terms of hardware, the tablet looks very netbook-like. It has a 1.6GHz Intel Atom N270 CPU and a 10.1 inch and a 1024 x 600 pixel resistive touchscreen display (which makes sense, because honestly OS X was designed for use with a mouse, not a fingertip — and a stylus is a closer approximation of mouse input). It also has 2GB of memory, a 320GB hard drive, 1.3MP webcam, 02.11a/b/g/n WiFi, 3 USB ports, Ethernet, VGA output, a card reader, and a 3000mAh battery, while weighing about 2 pounds. So it’s got good netbook parts, but still it’s basically a netbook in tablet form.

There are also Bluetooth and 3G options.

Right now the pre-order price is $750, which may seem pretty steep for what’s essentially a netbook with the keyboard hacked off. But there are a few reasons for that price. First, you’re paying for the expertise that went into making the preloaded software OS-X (I mean, Darwin) compatible. And second, Axon Logic is a relatively small company. I suspect there aren’t a ton of units lying around in a huge warehouse somewhere. It costs a lot more per unit to make a small quantity of any type of device and costs probably won’t come down unless demand ramps up, allowing Axon Logic to produce these tablets in significantly larger numbers. And with the Apple iPad taking the world by storm, it’s not entirely clear whether that will happen.

On the other hand, if you were really hoping that Apple would launch an OS X tablet instead of an oversized iPod touch earlier this year, the Axon Logic tablet may just be the best alternative around. Even if it costs $750 and requires you to install OS X on your own — which is a violation of Apple’s EULA since OS X is not meant to be installed on any non-Apple labeled hardware.