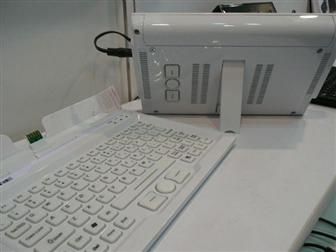 Taiwanese electronics maker Aware Electronics is showing off an intriguing mini-laptop at a Chinese trade show this week. The A-View has a 7 inch display, which seems so 2007. But it also features a removable keyboard, which means you can use the netbook as a traditional laptop or as a tablet. That certainly makes this system stand in the crowded netbook field, but the A-View has another thing going for it: Aware Electronics says it could sell for around $150.

Now, I have a feeling that Aware is marketing this little guy at computer distributors at that price, not consumers. But even if that’s the case, I wouldn’t be surprised to see the A-View retail for $200 to $250, which is a pretty good price for a device like this.

The computer includes 8GB of flash memory, 512MB of RAM, and can run Windows XP or Linux, which means it has an x86 processor.

If this whole concept seems familiar, that’s because it is. In early 2008 a company called Elonex began selling similar machines with detachable keyboards in Europe for about £99. And after checking out the Aware Electronics website, it looks like Aware was either the ODM of those Elonex machines, or both companies used the same reference design.

It does sound like the new A-View will have more RAM and storage space than the Elonex One. But I haven’t seen any information about the CPU or other features yet.

7 replies on “Aware Electronics $150 netbook has a detachable keyboard”