You can use a Google Chromecast to stream video from YouTube, Netflix, or other online media sites to your TV. You can also find apps that let you stream content straight from your phone to Chromecast, play games on your TV screen, or even draw pictures.

AutoCast goes a few steps further by letting you cast audio, video, or pictures from your phone, create playlists, control web video, or even multitask a bit by listening to music while looking at pictures, or viewing pop-up notifications on your TV while watching a video. 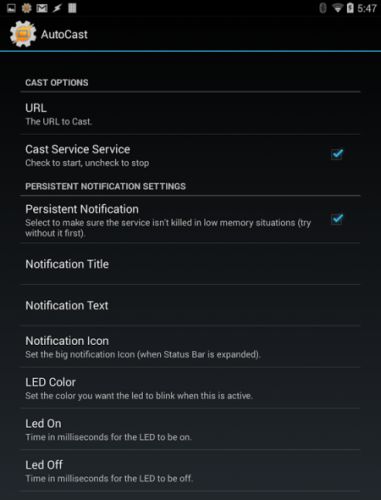 AutoCast Lite is a free Android app which you can grab from the Google Play Store. But it’s a plugin for Tasker, which you’ll have to buy for $2.99 if you want to use most AutoCast features. To unlock full functionality of AutoCast, you’ll also need to buy an unlock code, which currently sells for $1.37.

The app has a ton of features and configuration options… which means it can take a bit of work to set up. But once you figure out how to use it, here are a few things AutoCast can do:

Like Tasker, AutoCast appears to be a powerful, if not particularly user-friendly app. The only catch is that it’s likely to be a bit of a battery hog for your Android device, since the only way to stream content directly from your phone is to keep your phone running.

Google’s original pitch for the Chromecast is that it would stream content straight from YouTube, Google Play Movies, Netflix, and other websites. Sure, you fire up the app on your phone and hit the play button, but once that’s done you could shut off your phone altogether and the video keeps playing. When you’re streaming content straight from your phone, shutting off the phone means the video stops. So local streaming apps like AutoCast will likely drain your battery more rapidly than web-based Chromecast-compatible apps like Netflix or Hulu Plus.