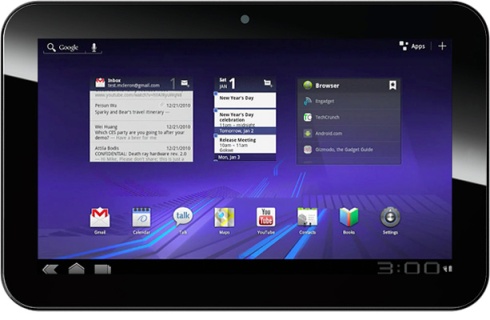 Pioneer Computers has produced a couple of interesting tablet designs over the past few years, including the 10 inch DreamBook ePad F10 Oak Trail tablet, and 11.6 inch ePad L11 with an Intel Atom N450 chip. Now the company is introducing a 10 inch tablet with an NVIDIA Tegra 2 processor and Google Android 3.0 operating system.

On paper, the Pioneer DreamBook ePad H10 HD looks a lot like similar models from Motorola, Samsung and LG. It features a high resolution 1280 x 800 pixel capacitive multitouch display, a 5MP rear camera and a 2MP front camera, and a 26.6Whr battery.

The tablet has 1GB of RAM and comes with 16GB to 64GB of flash-based storage. WiFi and Bluetooth come standard, while 3G is available as an option. The ePad H10 HD has a micro HDMI port, 3.5mm audio jack, micro USB port, SIM card slot, and micro SD card slot as well as a dock connector and built-in speakers and a microphone. The device also has a 3-axis G-sensor, a gyroscope, and an ambient light sensor.

Pricing start at $699 Australian dollars, which is about $687 US — but computers generally cost more in Australia, so it’s probably more fair to say the base price is similar to the $599 Motorola will charge for a XOOM WiFi tablet in the States.