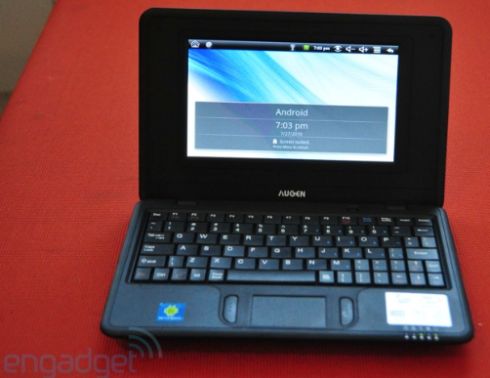 As we discovered yesterday, KMart is starting to get into the Android mobile device business. The company is starting to sell a $150 Android tablet from Augen, and while most stores don’t seem to have any units in stock yet a handful are already selling the tablet and more are expected to get it by this weekend.

Folks who have headed to KMart locations hunting for the Augen GenTouch78 tablet may not be having much success yet, but one reader wrote in to let us know that he did find a $99 Android netbook from Augen at his local store. And he’s not the only one. Android Guys has a few photos of the netbook, and Engadget’s Joanna Stern went and plunked down some cash to take one home.

Joanna reports that the machine feels very slow, and that while the netbook ships with an Android Market app, it doesn’t seem to actually install any apps. That said, the GenBook 74 does come with a web browser, Gmail app, Google Maps, and a handful of other useful apps, which ain’t bad for $99.

Honestly, this thing looks like every Android mini-laptop I’ve seen at CES over the last two years. I suppose it’s nice to see them actually start showing up in US retail shops. But it’d be even nicer if they were running a newer version of Android, had faster processors, or at least a working version of the Android Market — although you should be able to install Android apps manually if you can track down the APK installer files you’re looking for.

You can find more details at Engadget and you can check out Joanna’s hands-on video after the break.