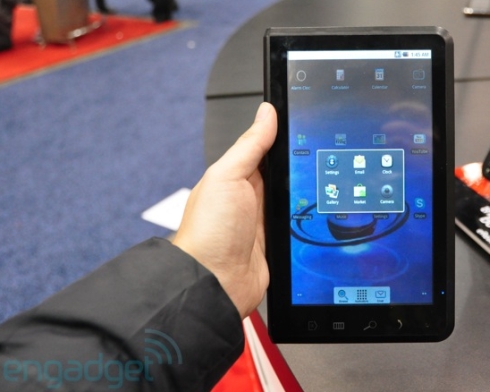 The Augen Gentouch78 got a lot of attention last year as the first sub-$200 Android tablet available from a major US retailer. It’s also a pretty lousy tablet, with a rather unresponsive 7 inch resistive touchscreen display, awkward button placement, and no accelerometer — which makes screen rotation kind of a hassle.

But Augen is hoping to capitalize on the buzz with a new line of Android tablets, first announced in October. Engadget went hands-on with the new models at CES last week.

The Gentouch Latte is basically a beefed up version of the Gentouch78 with a 7 inch resistive display, TC8902 processor, and 2GB of storage. The main difference is that the new models runs Android 2.2 Froyo instead of Android 2.1.

Things start to get a bit more exciting when you move up to the Latte Grande, which packs a capacitive display. The Gentouch Espresso packs a zippier ARM Cortex-A9 1GHz CPU, 8G of storage, and a front-facing camera.

The most interesting devices are the Gentouch Dolce and Doppio. The Docle is a dual boot 10 inch tablet with a 1GHz CPU, 1024 x 768 pixel display and Ubuntu Linux as well as Android 2.2. There’s also a keyboard dock called the Doppio which has an extra battery and 160GB hard drive. The Dolce tablet will reportedly run $369, but the Doppio keyboard dock will add $200 to the price.

For more pictures and details, check out Engadget’s run-down.