Audacity is a popular free and open-source audio editing utility available for Windows, Mac, and Linux computers. Under development for more than two decades, the software now has a robust and powerful set of tools that you can use to record, edit, and apply post-processing effects to music, podcasts, or any other type of audio.

Today Audacity 3.0.0 was released, and it brings a few new and improved features, more than 160 bug fixes and one major change: the introduction of a new project file format. 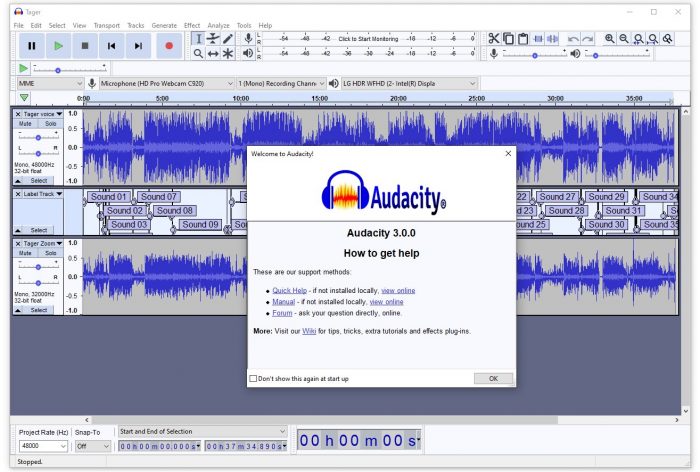 Up until now when you save an Audacity project file, you’d get a small .aup file that basically told the software where all the audio files and other associated files in your project were located, allowing you to pick up where you left off when re-opening an audio editing project.

But if you accidentally moved or deleted some of those other files, then the project session wouldn’t restore properly. And if you wanted to send a project to somebody else, you’d need to make sure all your files were included, possibly by ensuring they were all in the same folder and then zipping that entire folder.

Audacity 3.0.0 replaces .aup with a new .aup3 file format that holds everything in a project including your audio files. That means .aup3 files will be much larger than .aup files. But it also means that you can now save or share your projects with a single file.

One thing to keep in mind is that opening old Audacity projects in version 3.0.0 or later will automatically convert them to .aup3, so you may want to save a backup first if that’s something you’re uncomfortable with.

It’s also worth noting that .aup3 files shouldn’t be larger than the sum of all of the files combined to create an .aup file… but I was surprised that my first attempt at creating a project using the new format resulted in a file that was twice the size I had anticipated. Then I figured out that this was because Audacity was converting my 16-bit, 44.1 Hz WAV audio files to 32-bit float when I imported them. Once I changed my project settings and started over, I was able to save a project file that was just a little bigger than my raw audio recordings.

Audacity’s developers say that in addition to helping keep your files organized, the new .aup3 format should allow some Audacity functions (especially effects and generators) to run more quickly. The new format also helps with automatic recovery after a crash, since it’s less likely that you’ll have to worry about missing block files.

Other changes in Audacity 3.0.0 include: