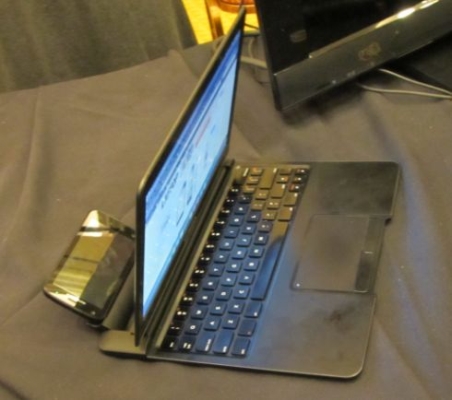 Good news everybody: AT&T plans to start taking pre-orders for the Motorola Atrix 4G on February 13th. The bad news? The phone won’t be quite as cheap as we had hoped if you’re planning on picking up the optional Webtop laptop docking station.

AT&T has announced pricing for the Android smartphone, which will run $199.99 when you sign up for a 2-year contract, but it will cost $499.99 to purchase the docking station that effectively turns the phone into a laptop computer. That means the docking station will be about twice as expensive as we’d been hearing… and it will cost even more if you don’t buy the Webtop at the same time as the phone.  Oh yeah, you’ll also have to pay for a tethering add-on in addition to your smartphone data plan.

The dock will run $499.99 if purchased separately.

The Webtop docking station has an 11.6 inch display and a separate 36Whr battery. When you dock the phone, it acts as the brains of the laptop, powering a custom Linux-based operating system with a full Firefox web browser. While the phone is docked you can also run Android apps is a window, and make phone calls.

Sure, $500 isn’t a bad price for a smartphone and a laptop, and the Atrix 4G and Webtop can function as both. But if you have to pay $300 for the Webtop, I have to wonder why you wouldn’t just spend $300 on a netbook or other computer that functions as a standalone device — and works even when you don’t dock your phone. The Webtop is basically useless without the Atrix 4G.