A year ago T-Mobile unveiled Binge On, a feature that allows subscribers to stream content from select internet video services without the data counting against your data cap. But in exchange for that feature, you have to let T-Mobile throttle your video quality to 480p. If you want HD streaming you can disable Binge On, but then video streams will count against your data cap.

Now rival carrier AT&T has announced its own plan to throttle videos… but the idea is just to reduce your data usage. Video streams will still be counted against your data cap. 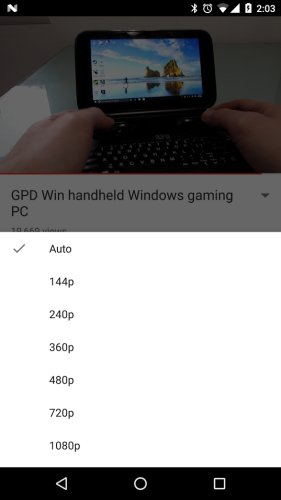 AT&T calls its new feature Stream Saver, and it’ll be rolling out automatically to all AT&T subscribers in early 2017, including pre-paid GoPhone customers.

In a nutshell, once Stream Saver is enabled, any time you try to stream an HD video, it will come through at DVD-quality 480p resolution. Since videos are smaller at that resolution, you’ll end up using up less of your mobile data allowance, which means you can theoretically watch more videos per month without going over your limits.

Prefer to watch HD content on your phone’s HD display? AT&T says you will be able to turn off Stream Saver or turn it back on again. The company will send customers a message with instructions for doing that when the service launches.

Overall, it sounds like a move that could really come in handy for some users… especially since it seems to be optional. But AT&T’s choice to make it opt-out rather than opt-in is an interesting one that may end up benefiting the wireless provider as much as users.