The Atari VCS is a retro-inspired game console that’s basically a small PC with an AMD Ryzen Embedded processor and Radeon Vega graphics. It’s expected to run a custom Linux-based operating system with support for classic games and some modern titles.

First unveiled as a concept more than two years ago, the latest word from the company is that the VCS should ship in March.

Today the team behind the Atari VCS have posted an article providing a closer look at the console’s motherboard as well as details about its memory and storage (both upgradeable).

But at the same time, The Register has published an article which suggests the Atari VCS project may be on shaky ground. 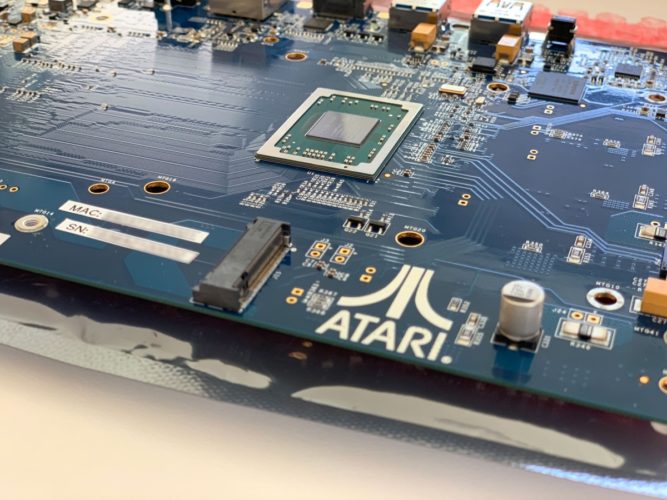 In a nutshell, last year Atari outsourced the hardware and software design to a company called Tin Giant, led by Rob Wyatt. Now the Register reports that Wyatt has quit the project — he says Atari hasn’t paid him in six months.

That PCB that Atari is showing off? Tin Giant only delivered the prototype to Atari last month. According to The Register “Wyatt and his team were in the middle of debugging it before deciding to draw stumps and quit,” which means that another company will likely have to help Atari finish the work… assuming they get paid to do the job.

It’s unclear why Atari would be falling behind on payments. The company raised $3 million for the Atari VCS in a 2018 crowdfunding campaign before opening the door to more pre-orders in June, 2019. But The Register dug up a financial report suggesting that the company has been losing money for the past few years.

That said, if this thing does come to market, it may be a good deal for folks looking for a cheap, Linux-powered gaming machine. The Reg’s sources suggest that rather than create a truly custom Linux distribution and software ecosystem, the Atari VCS is basically just a cheap Linux computer that runs games. It’s basically a budget Steam Machine at a time when most hardware vendors have given up on the concept.

It’s just unclear at this point whether this thing ever will see the light of day or if it will have any serious support if and when it does.

Update: Atari released a statement to Gamasutra to the effect that:

The Atari VCS project has always been a team effort and its success has never been and will never be dependent on any single individual or partner.

The company says it still plans to bring the VCS to market, and will have more details to share in the “coming weeks and months.”