The Asus Zenfone 2 is an affordable smartphone with surprisingly strong specs: a model with 4GB of RAM and 64GB of storage sells for just $299, while a version with 2GB of RAM, 16GB of storage, and a slightly slower processor costs $199.

So what do you do with the money you save on the phone? You can spend some of it on accessories… Asus has a of those to choose from including earbuds, portable battery packs, and the Lolliflash dual-LED flash bulb which you can use to illuminate selfies.

My favorite accessory though, is the Zenfone 2 View Flip Cover Deluxe with NFC, which Asus sells for about $40. It offers protection for the phone, but also lets you use the phone in a few interesting ways. 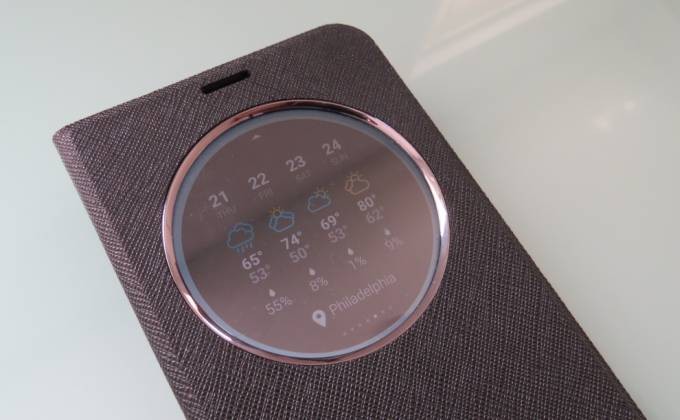 The Zenfone 2 has a removable plastic cover on the back. Peel it off and you can access the microSD card slot and dual SIM card slots.

You can also replace the cover with a model in a different color or texture. Or if you have the View Flip Cover, you can slap it onto the back.

Once the cover is attached it will protect the back of the device while giving it a bit of a grippy texture. It also folds over the front of the phone to protect the screen: but there’s a window in the top where you can see a portion of your screen.

While that window is covered in plastic, you can touch the screen to interact with your phone even when the cover is closed. This lets you view the time, calendar appointments, missed calls, or other details. You can also toggle wireless, sound, or notification settings, turn on the flashlight, or even snap a picture using the phone’s rear camera: all without uncovering the screen.

One of the best things about the flip cover though, is that works with the phone so that as soon as you lift the cover it will turn on your screen. Since the Zenfone 2 has an awkwardly-placed power button on top of the device, it’s much easier to turn on the phone by opening the flip cover than by reaching up to the power button.

When you close the lid most of your screen will turn off, while a circular widget will appear in the window area. You can navigate between the toggles, flashlight, calendar, clock, forecast, and camera functions by swiping left or right (there’s also a magic 8-ball feature, but it’s obviously pretty pointless. Fortunately, you can enable or disable ant of these features in the phone’s settings). You can jump to one feature more quickly by dragging your finger around the edge of the circle to highlight the function you want.

There’s also a ring of color that surrounds the widgets. It shows your battery level, and when you’re running out of juice the color will switch from light blue to red.

Asus is hardly the first company to come up with this type of flip cover. But it’s a nice little accessory that not only protects the device, but also adds some functionality.