Asus is showing off two laptops with touchscreen displays where you’d normally find a touchpad. The first is called the ZenBook Pro 15 UX580 and it’s set to hit the streets in July for $2300 and up.

But Asus has a second model with a smaller screen and slightly more modest specs. It’s called the ZenBook Pro 14 UX480 and it should be available later this year. Pricing hasn’t been announced yet. 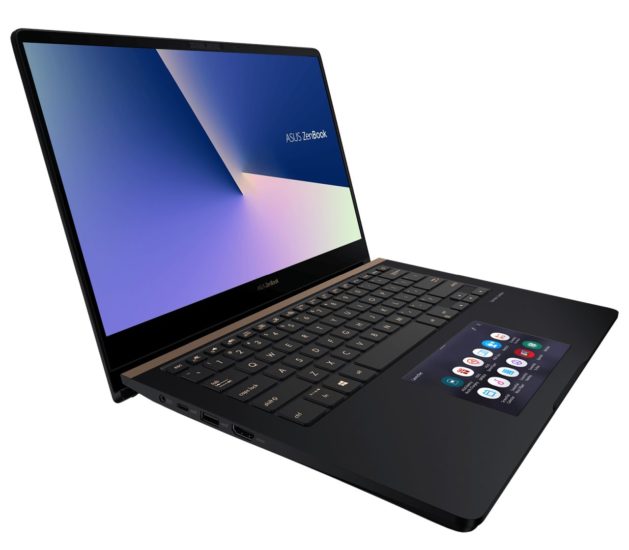 The 14 inch model features an Asus ErgoLift hinge, like the new Asus ZenBook S UX391, VivoBook 14, and VivoBook 15. When you open the laptop, the lid drops down below the back of the computer, propping up the keyboard at an angle for more comfortable typing.

Asus says the ZenBook Pro 14 UX480 will feature a 1920 x 1080 pixel display, an unspecified quad-core 8th-gen Intel Core processor and NVIDIA GeForce GTX 1050 graphics, up to 16GB of RAM, and up to 1TB of PCIe solid state storage (with support for Intel Optane memory).

The 15 inch model, by comparison, has NVIDIA GeForce GTX 1050 TI graphics and a choice of 8th-gen Core H-series processors including quad-core and hexa-core chips. It’s also available with a choice of 1080p or 4K display options.

The most interesting feature on both laptops is still the ScreenPad, which is a touchscreen display that you can use to launch apps, open a virtual numeric keypad, calculator, or calendar, or access frequently used functions in some Windows applications including Word, Excel, and PowerPoint. You can also just use it like a Precision touchpad with support for 4-finger multitouch gestures.

via GameTimers.it, Asus, BGR, and Gadgets 360