The Asus VivoTab Smart is a Windows 8 tablet with a 10 inch display, Intel Atom Clover Trail processor, 2GB of RAM, and 64GB of storage. It has a starting price of $499, and the tablet’s up for pre-order from J&R and Abt. 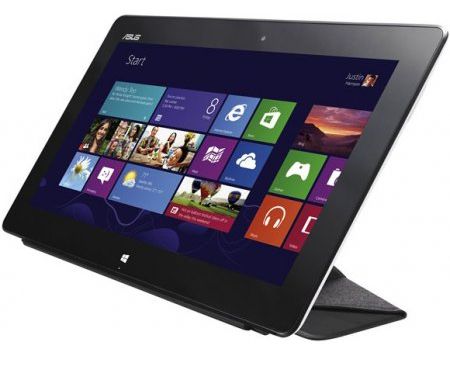 At that price, the VivoTab Smart is cheaper than the Asus VivoTab RT — a $599 tablet that’s about the same size, but which has 32GB of storage, an NVIDIA Tegra 3 processor, Windows RT operating system, and an included keyboard dock.

Not only does the VivoTab Smart not come with a keyboard dock, but Asus doesn’t even offer one. Instead you can get an optional Blueooth keyboard which can also latch onto the tablet and act as a cover to protect the screen.

What the VivoTab Smart does have that the RT model does not, is the ability to run pretty much any app designed for Windows. While the Intel Atom Z2760 Clover Trail processor isn’t exactly a speed demon, the low power chip is an x86 processor, which means that this tablet can run the full Windows 8 operating system, as well as apps designed for Windows 7 or Windows 8.

Windows RT tablets, on the other hand, can only run apps designed specifically for Windows RT. For the most part those apps are only available for download from the Windows Store.

Asus also offers another VivoTab model with an 11.6 inch display and a digital pen. There is an optional keyboard dock for that model — but that VivoTab has a starting price of $799.

The tablet has a micro HDMI port, micro USB port, and micro SD card reader, weighs about 1.3 pounds, and has a 25 Whr battery which Asus says should be good for up to 8.5 hours of run time.