Asus has been offering affordable portable notebooks for a while. The company practically invented the netbook by introducing the first Eee PC mini-laptop in 2007.

Now that netbooks are out of fashion, Asus is taking a few different approaches to the affordable portable space. Asus is one of the biggest players in the Android tablet space. The company recently introduced a line of Windows 8 and Windows RT tablets. And then there’s the VivoBook line of notebooks. 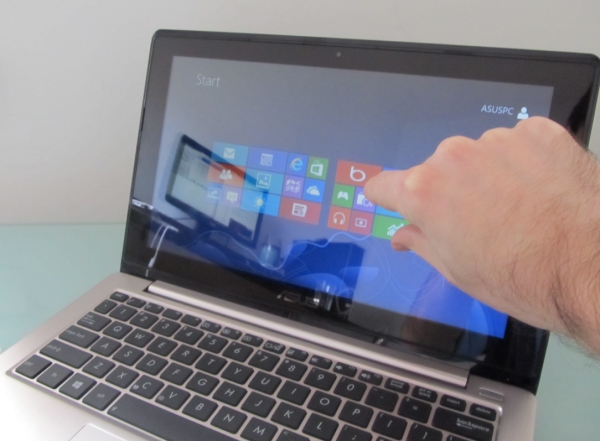 Asus VivBook X202E is an 11.6 inch, 3 pound notebook that sells for as little as $499. It’s not quite thin enough to be called an ultrabook — and it doesn’t have a solid state disk, which is another ultrabook requirement. But with an Intel Core i3 Ivy Bridge processor it’s a pretty zippy little notebook.

It also has a built-in touchscreen display, which comes in handy when using the new touch-friendly Windows 8 user interface. The X202E also happens to be one of the cheapest touchscreen notebooks on the market.

That’s a bit of a mixed blessing. The screen has an unusually large bezel… and wobbles a bit when you touch it. If Asus skimped on anything else, it might have been the battery. The notebook gets lackluster battery life, and the battery isn’t user replaceable.

Still, if you’re looking for an inexpensive (and portable) Windows 8 notebook with a touchscreen, the Asus VivoBook X202E may be one of the best options around.

The VivoBook X202E measures 11.9″ x 7.9″ x 0.9″ and weighs about 2.9 pounds. It has a 38Whr battery, which Asus says should last for about 4 hours, which is about what I managed to eke out in my tests — although you’ll probably run down the battery more quickly by watching videos or playing 3D games.

Asus ships the laptop with Windows 8 64-bit, and you can use the touchpad, touchscreen or an external pointing device to navigate the Windows 8 user interface.

While the Asus VivoBook X202E has some premium features such as a touchscreen display, a light-weight case (made of metal and plastic), and an Ivy Bridge CPU, this notebook clearly isn’t in the same class as a high-end ultrabook.

At nearly an inch thick, it’s a bit too chunky to be called an ultrabook. You don’t get a backlit keyboard. And while premium touchscreen devices tend to have edge-to-edge glass to support Windows 8 gestures that involve swiping from the edge, the VivoBook X202E does not. 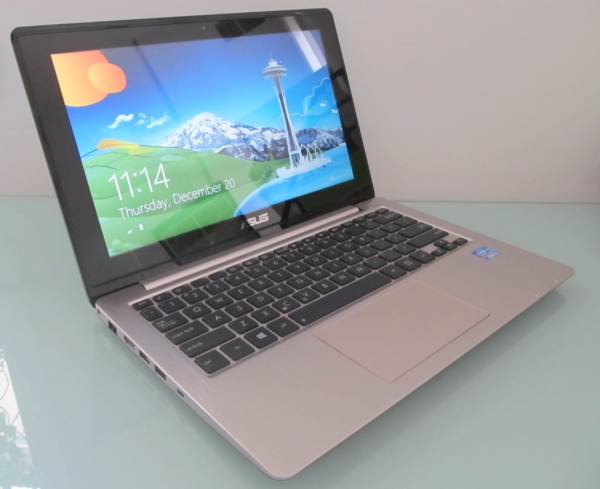 Instead the display is surrounded by a plastic rim — and there’s an extra-wide bezel around the display area, which gives you room to swipe from the edges of the screen.

The result is that while the VivoBook X202E has an 11.6 inch display, it’s a little larger than some other notebooks with similar screen sizes. In fact, the laptop is a little wider than the 12.1 inch Asus UL20A notebook I bought in 2009.

That’s not to say that the X202E is extraordinarily large or unwieldy. Its just a tad wider than you might expect an 11.6 inch notebook to be thanks to that extra-large bezel.

Asus also made sure to include an extra-large touchpad below the keyboard, giving you plenty of room to perform Windows 8 gestures including two-finger scrolling, 4-finger app switching, and swiping-from the edge (much the same way you would with the touchscreen). 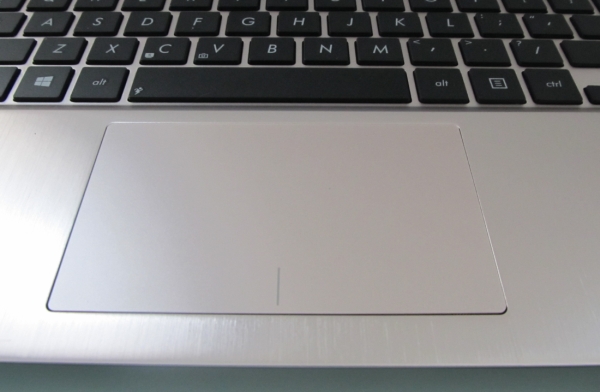 Unfortunately I found the touchpad sensitivity to be a bit hit-or-miss. It’s certainly not the worst touchpad I’ve ever used, but I sometimes found myself placing two fingers on the touchpad in order to “right-click,” but instead initiating a left-click. From time to time I’ve also found myself swiping the touchpad with my palm while typing, and unintentionally moving the cursor so that I end up typing on a different line of text.

There is a touchpad settings app that lets you enable and disable features and adjust the touchpad speed. But I didn’t see any options for adjusting sensitivity. 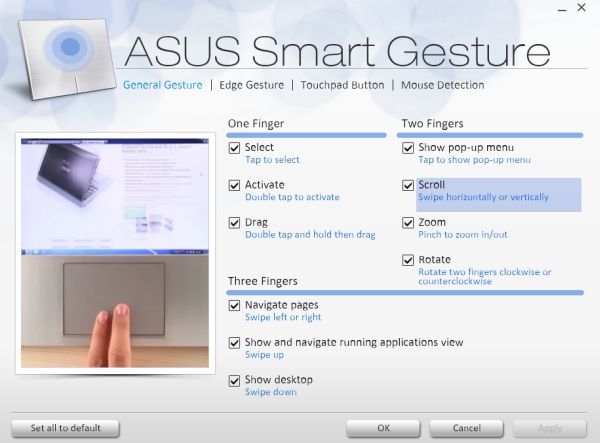 The keyboard includes all the usual keys — but some seem a little small. The tab key, for instance, is a bit smaller than I’m used to, which can make finding it a little difficult — but that’s something you get used to the more you use the laptop. For the most part, I’m able to type just fine on this notebook, and I didn’t notice much flex in the center of the keyboard.

I’m not a huge fan of the incredibly tiny arrow keys in the lower right corner, which also function as PgUp, PgDn, Home, and End keys when you hold down the Fn key. They’re so small that even after using the laptop for a few days, I found myself having to look down at the keyboard to make sure I was pressing the correct key. 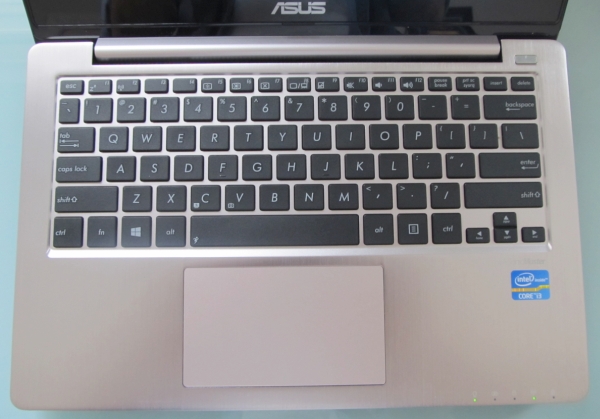 The glossy display does reflect a fair bit of glare — especially when used in sunlight or directly in front of a lamp. Viewing angles are decent when you look at the notebook from the left or right side. But they’re pretty bad when you tilt the screen back — colors start to wash out pretty quickly, especially when you’re viewing photos or videos.

The most perplexing thing about the display, though, is that it wobbles when you touch it. On a typical notebook this wouldn’t be much of a problem. But on a touchscreen notebook it can be very disconcerting.

Every single time you tap, swipe, or perform another touch-based gesture on the screen, it will bounce a little. 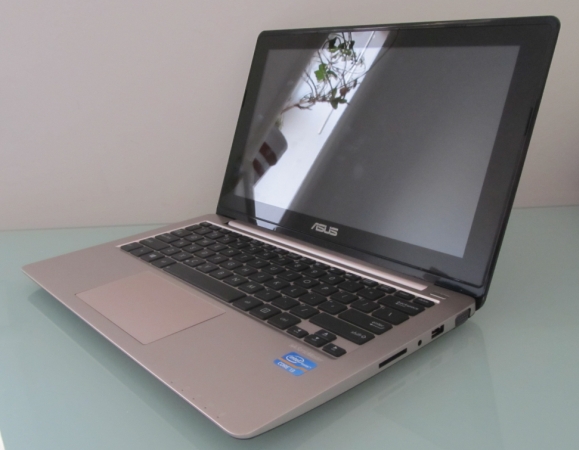 This isn’t necessarily a fatal flaw — especially if the touchscreen is something you plan to use occasionally rather than constantly. It’s a bit disappointing — but I can’t say it’s unexpected. After all, the VivoBook X202E is one of the cheapest touchscreen notebooks you can buy.

While it’s not as thin as an ultrabook, at 2.9 pounds it’s awfully light and portable — and Asus even includes a rather small charging cable instead of a two-piece power brick. 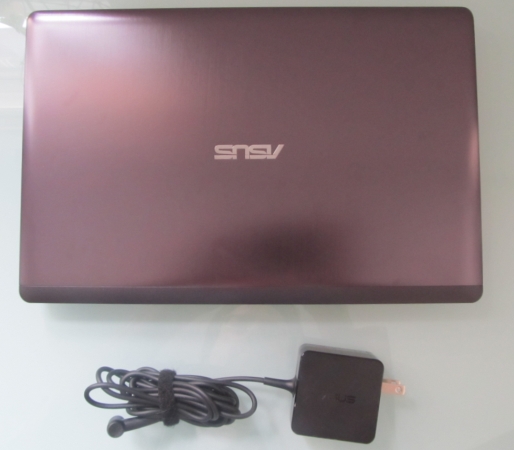 The base of the laptop appears to be covered with plastic, but that keeps it from getting excessively warm or cold. There’s a vent in the center of the base which helps keep the laptop from overheating. It also means you’ll hear a bit of fan noise when the notebook is in use — although the VivoBook X202E fan is far from the loudest notebook fan I’ve heard. (That honor would go to the jet engine-like fans on the Acer Aspire S7 ultrabook). 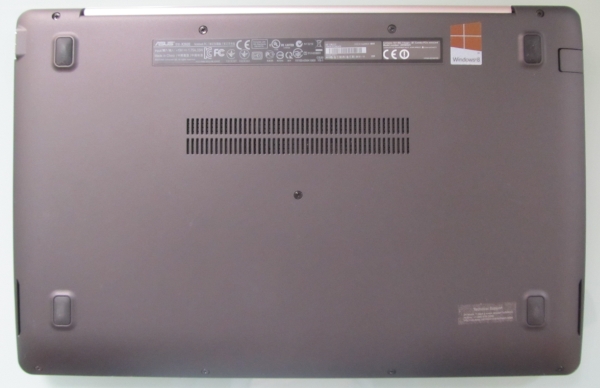 Unfortunately there’s no access panel on the bottom of the laptop, so if you want to perform any repairs or upgrades, you’ll need to remove a series of screws and then pry off the bottom panel which is held in place by plastic clips.

The 4GB of RAM is soldered to the motherboard, so there’s no way to upgrade the memory. But you should be able to replace the 7mm hard drive with a different hard drive or solid state disk.

You could also theoretically remove the battery once the case is open, but since this laptop isn’t designed to be opened up you’ll probably have a hard time finding anyone selling spare batteries.

The sides of the laptop are just thick enough to accommodate a full-sized VGA port along with USB, HDMI, headset, and SDHC card ports. There’s also an Ethernet jack, but you’ll need to lower a little plastic door in order to fit a full-sized Ethernet cable into that slot.

I’ve been a bit spoiled by the ultrabooks and Chromebooks I’ve reviewed recently. At this point, I kind of expect a computer to boot in 20 seconds or less. The Asus VivoBook X202E takes closer to a minute.

You can largely blame the 5400RPM hard drive for that. Notebooks with speedier solid state disks tend to boot much more quickly, especially if they’re running an operating system optimized for quick booting, such as Chrome OS or Windows 8.

Once the OS is up and running though, the VivoBook X202E feels pretty zippy. It resumes from sleep just about as quickly as any notebook with a solid state disk. And while it has a Core i3 processor (which is the cheapest Core family chip Intel offers), it’s still an Ivy Bridge processor (which means it’s a 3rd-generation Intel chip). As such, this laptop performs almost as well in many tests as fast as one with an Intel Core i5 Sandy Bridge (second generation) chip. 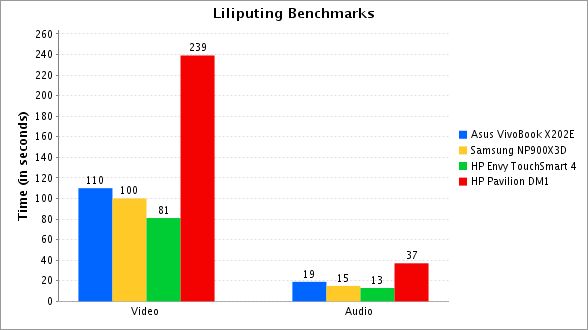 While it trailed the Samsung Series 9 and Asus Zenbook UX31 ultrabooks (Core i5 Sandy Bridge) and HP Envy 4 TouchSmart (Core i5 Ivy Bridge) ultrabooks in most of my tests, the VivoBook X202E ran circles around the HP Pavilion DM1 (AMD E2-1800) in most CPU tests and performed significantly faster than any Intel Atom-powered netbook I’ve ever tested. 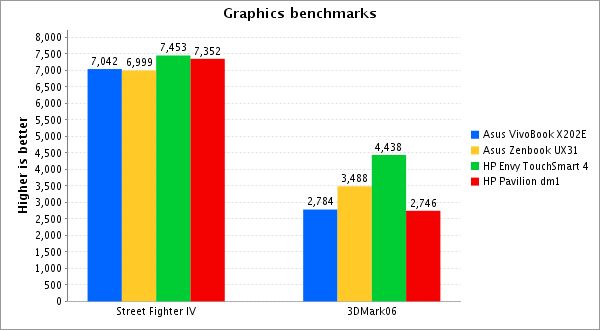 Asus also includes a Power4Gear utility which lets you optimize the laptop’s settings for high performance or longer battery life.

The notebook’s stereo speakers are located on the bottom of the laptop — but they’re positioned near the front of the chassis where the body curves up. That means they’re probably never going to be completely covered by your lap or a tablet, and for this reason they sound a little louder and more clear than the speakers on most portable notebooks.

Just don’t expect a lot of bass. You won’t get it — and when I tried playing some bass-heavy songs, the speakers started to distort a bit.

While I’ve only tested the laptop using Windows 8, there is an option in the pre-boot settings to disable UEFI Secure Boot, which means that you should be able to install Linux, Windows 7, or other operating systems on this notebook.

If you’re in the market for a portable notebook with Windows 8 and a touchscreen display, the Asus VivoBook X202E is one of the cheapest options available, at $499 and up. But despite the relatively low price, it’s a pretty decent laptop which offers acceptable performance, a decent keyboard, and a rather attractive case design. 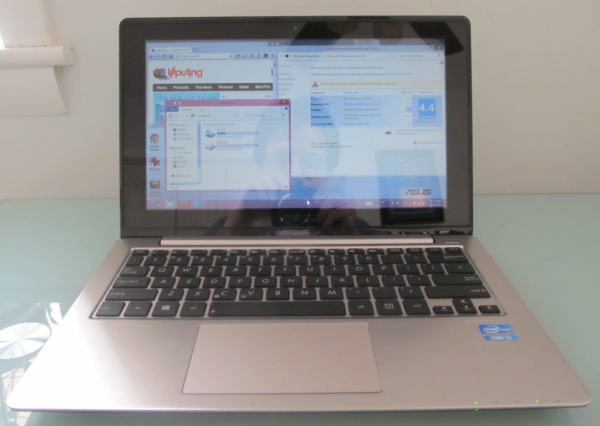 Just don’t go expecting too much from a notebook in this price range. The touchscreen wobbles, the touchpad isn’t quite as reliable as it could be, and the notebook doesn’t exactly offer all-day battery life.

Now that Asus has pretty much pulled out of the netbook market, the company is positioning the VivBook X202E as a sort of successor to the Asus Eee PC line of mini-laptops. It’s a bit bigger than a netbook, and a bit more expensive. But it offers the kind of user experience you’d expect from a full-fledged laptop (albeit an inexpensive one) in a 2.9 pound package.