As expected, the latest Windows tablet from Asus is a 2-in-1 model with a detachable keyboard, and an Intel Pentium Silver N6000 processor.

But the Asus VivoBook Slate 13 OLED, which will be available in December for $599 and up, has one feature you don’t often find on Windows PCs in that price range: an OLED display. 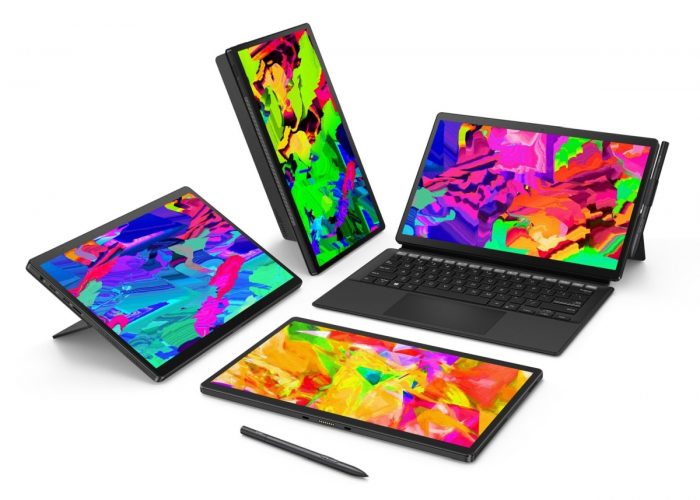 The tablet’s 13.3 inch, 1920 x 1080 pixel OLED display supports up to 550 nits of peak brightness (or 400 nits of sustained brightness, and features 100% DCI-P3 color gamut and PANTONE validation. The tablet supports Dolby Vision and it also has quad speakers with support for Dolby Atmos sound.

In addition to supporting multi-finger touch input, the VivoBook Slate 13 OLED also supports an Asus Pen 2.0 digital pen with support for 4096 levels of pressure sensitivity and a 266 Hz touch sampling rate. The pen comes with 4 interchangeable tips and has a battery that can be recharged with a USB-C charging cable. The pen is compliant with Microsoft’s Pen Protocol 2.0, which means you should also be able to use a Surface Pen or any other MPP 2.0-compatible pen with the tablet.

The tablet’s detachable keyboard features 1.4mm key travel and full-sized keys, but it’s a soft keyboard rather than one with a rigid design, so don’t expect a laptop-like experience. Typing on a desk or table should be fine, but it might take a little more work to balance the tablet & keyboard on a lap.

There’s also a cover stand that can be adjusted at up to a 170 degree angle.

While the $599 entry-level configuration will likely have just 4GB of LPDDR4X memory and 128GB of eMMC storage, Asus will also offer models with up to 8GB of RAM and a 256GB M.2 PCIe 3.0 NVME SSD.