Asus plans to launch a new line of Windows 8 notebooks later this year that take some design cues from the company’s popular Transformer line of Android tablets. Like the tablets, the new Asus Transformer Book notebooks will straddle the line between notebooks and tablets thanks to a detachable keyboard dock.

The company plans to offer Asus Transformer Book models with 11.6 inch, 13 inch, and 14 inch screens. All three will be available with 1920 x 1080 pixel displays. 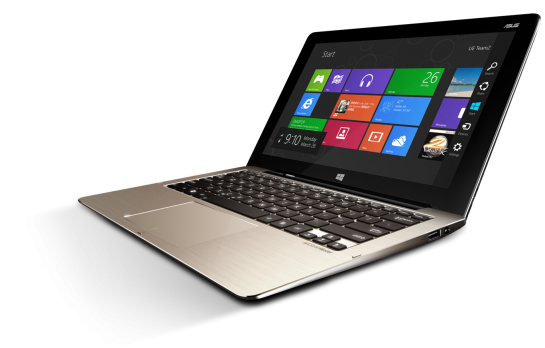 The Transformer Book notebooks will be powered by Intel Ivy Bridge processors and NVIDIA graphics. They’ll come with up to 4GB of RAM and a choice of a hard drive or solid state drive.

With the keyboard attached, these computers look a lot like a traditional notebook. But since they all have touchscreen displays you’ll be able to interact with the Windows 8 Metro style user interface using your fingers, whether the keyboard dock is in use or not.

The notebooks will also feature front and rear cameras — something that’s common on tablets, but not so much on notebooks. The front-facing camera is described as an HD camera for video chat, while the rear camera has a higher resolution 5MP sensor.

Asus hasn’t released any information about the price or launch date yet. But I expect prices to vary quite a bit from model to model, since Asus is promising to deliver versions with Intel Core i3, Core i5, and Core i7 processors.

The Verge has a video of the transforming laptop in action.