The Asus PadFone 2 is an Android smartphone with a quad-core processor, a high resolution display, a big battery, and a 13MP camera. But that’s not really what makes the PadFone 2 special. It’s the optional docking station.

Asus offers an optional Padfone 2 Station which transforms the phone into a tablet. The operating system, storage, and processor all rest on the phone. But when you slide it into into the tablet dock you get a bigger screen, larger battery, additional antennas and more.

Asus says the PadFone 2 will be available in Europe and Asia by the end of the year. There’s no word on a US launch date yet. 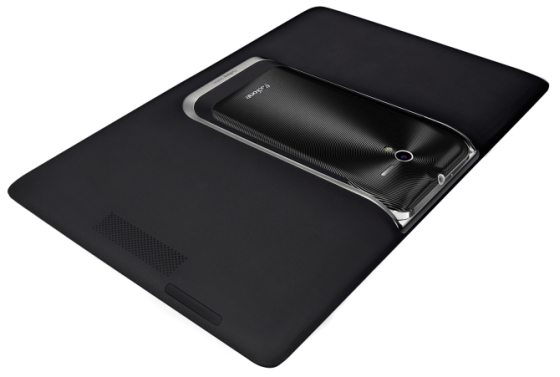 If you’ve been following the PadFone news and leaks there aren’t a lot of surprises in today’s announcement. But Asus has confirmed the following specs:

A phone/tablet bundle will sell later this year in Europe for €799 ($1039) and up. Those prices probably don’t tell us much about what the device would cost in the US though.

As you probably guessed from the name, this is the second PadFone from Asus. The first model was never very widely distributed. But the company has updated the design so that you don’t have to lift a door on the tablet dock to slide in the phone. Instead it slots right into a compartment on the back.

Overall the new phone seems like a big step up from the original PadFone… but aside from the new docking mechanism, the tablet hasn’t changed much. It’s still basically a 10.1 inch, 1280 x 800 pixel external display and extra battery for the phone.

Unfortunately Asus hasn’t made any announcements about additional docking stations such as keyboard desktop docks.