Asus is rolling out an update to its Padfone family of smartphones that transform into 10 inch tablets with the help of a tablet dock. The new model features a refined design, a faster processor, and less storage (but a new microSD card slot to help make up for it). 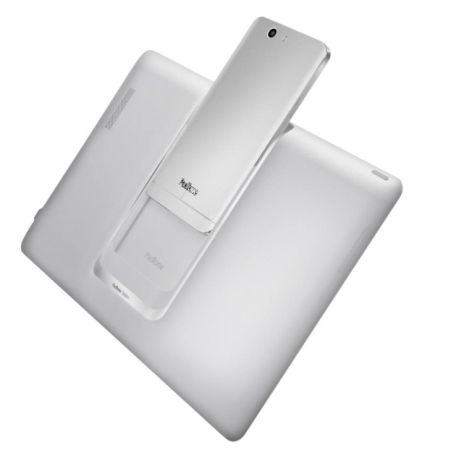 It has a microSD card slot, a 2400mAh battery, a Super IPS display, and support for WiFi, Bluetooth, 3G and 4G LTE — but it’s designed for use on European and Asian wireless networks at the moment, and might not be much use in the United States (unless you don’t actually plan to use your phone to make calls or surf the web on the go).

The Tablet Station has a 10.1 inch, 1920 x 1200 pixel IPS display and a 5,000mAh battery. It uses the phone’s processor, storage, memory, cameras, and other hardware for its guts, so it doesn’t work as a standalone device.

While Asus offered an optional keyboard dock for the original Padfone, the company currently has no plans to sell an official keyboard accessory for the new Padfone Infinity. So if you want to use your phone/tablet hybrid as a laptop you’ll need to pick up your own Bluetooth keyboard.

The phone sells for about $640 in Taiwan, and the tablet dock costs about $240. But if you already have the original Padfone Infinity tablet dock, you can just buy the new phone and use the old dock.

via Asus, Engadget, and AnandTech