Asus is bringing a new Fonepad to market. The company uses the name to describe a device which blurs the lines between a phone and tablet by giving you a tablet-sized display, but the ability to make phone calls.

The new Asus Fonepad 7 features a 7 inch, 1280 x 800 pixel display, an Intel Atom processor, and generally looks a lot like last year’s model — but it’s expected to have a faster processor and a better camera, among other things. 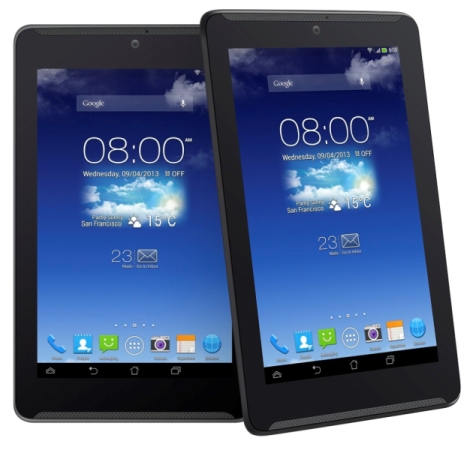 The Asus FonePad 7 showed up at some retail sites in Europe in August, with a price tag of around $300. Now Asus has posted a promo video on YouTube.

The new tablet features stereo front-facing speakers, a microSD card slot, a 1.2MP front camera, and a 5MP rear camera with an F2.4 lens. It’ll be available in black or white.

Other specs are expected to include 1GB of RAM, 8GB to 32GB of storage, WiFi, Bluetooth, and a 1.6 GHz Intel Atom Z2560 dual-core processor with PowerVR SGX 544MP2 graphics.

While those specs aren’t exactly top-of-the-line for a tablet or a smartphone, they should be good enough to run Android 4.2 Jelly Bean and handle most Android apps.

Overall, the Fonepad 7 seems to be aimed at budget-conscious shoppers who don’t want to buy a tablet and a smartphone, and who don’t mind either holding a huge phone up to their head or using a headset.