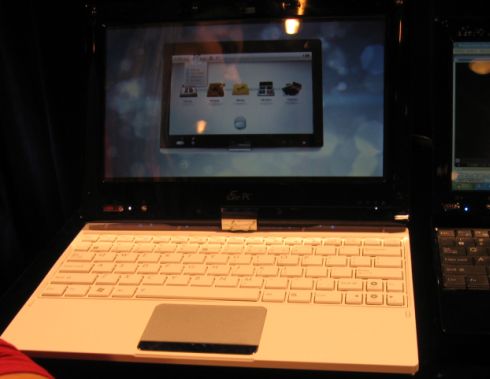 Sure, Asus played up the Eee PC T91 netbook with the 8.9 inch convertible touchscreen during the company’s presentation this afternoon. But when all the talking was done, you know what I discovered? An Asus Eee PC T101H hanging out on the stage. It’s basically the same machine as the T91, except it has a 10 inch display and a shiny new keyboard with the shift key located to the left of the up arrow!

The keys are also flat and MacBook-like, rather than the concave keys you find on most existing Eee PC mini-laptops. I personally prefer the concave keys, but I know a lot of folks have been waiting forever and a day for Asus to change the location of that shift key. And for thos people, I have some more good news: The Asus S121 also has a nice large shift key to the left of the up arrow.

In fact, Asus reps I spoke with said that pretty much every new Eee PC will feature the new keyboard layout with a larger shift key on the left side of the up arrow. The one exception is the Eee PC T91, which seems to use the same keyboard as the Eee PC 900/901 series.

The pricing on the Eee PC T91, T101H, and Asus S121 haven’t yet been finalized, but I think it’s fair to say that the S121 with its 512GB SSD is going to cost quite a bit more than your typical netbook. The goal is to keep the price for the Eee PC branded tablets comparable to other Eee PC netbooks.

The tablets on display at CES weren’t quite 100% functional, but Asus expects to have them on the market early this year, possibly within the next few months.

You can find a few more photos of all three machines after the break.