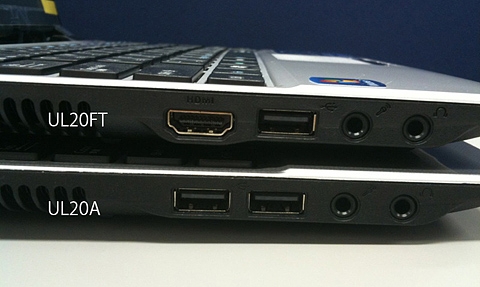 The Asus UL20FT which launched recently is an updated version of the older Asus UL20A 12.1 inch notebook. But while the older model has an Intel Core 2 Duo SU7300 CPU, the new model has an Intel Core i3-330UM processor. While the two laptops look virtually identical on the outside, the folks at Asus-Event have put the two side by side for a photo shoot and discovered a few minor differences.

First up, it looks like Asus refined the touchpad design. The UL20A has a dimpled touchpad while the UL20FT has more of a textured surface. Both sit at about the same level as the palm rest and both feature a single large button with a rocker in the middle for separating left and right clicks.

The other major change in case design is the addition of an HDMI port on the left side of the laptop. It replaces a USB port on that side, which has instead been moved to the right. This means that like the UL20A, the UL20FT has a total of 3 USB ports, but it also makes room for the high definition audio and video output.

Asus has also given the textured pattern on the palm rest area a redesign that’s subtle enough that you probably wouldn’t even notice it if you weren’t looking at  both machines at the same time.

You can find more comparison photos at Asus-Event.