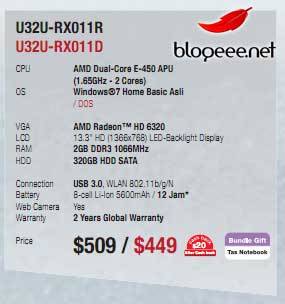 Asus is apparently working on a new 13.3 inch laptop with a 1.65 GHz AMD E-450 dual core processor and Radeon HD 6320 graphics. Blogese reports it’s called the Asus U32U and it’s expected to ship early next year for $449 and up.

Update: The Asus U32U is now available in some regions.

The AMD E-450 chip falls somewhere between what you’d expect from a netbook processor and a full-blown laptop or desktop chip. It has a TDP of 18W, which allows you to get better battery life than you’d see from a computer with a more powerful AMD processor.

But the AMD E-series chips can run circles around Intel Atom processors, which means that if you don’t need a bleeding edge device, you may be able to use a computer like the Asus U32U as a primary computer.

Asus is no stranger to the ultraportable space. The company was a pioneer in the netbook space and the new Asus Zenbook UX21 and UX31 notebooks are two of the first ultrabooks to hit the market. The Asus U32U looks like a product that’s designed to fit squarely in between those two extremes.