, I haven’t seen any stores with the 16GB version in stock on Sunday, but that should change in the next day or two. 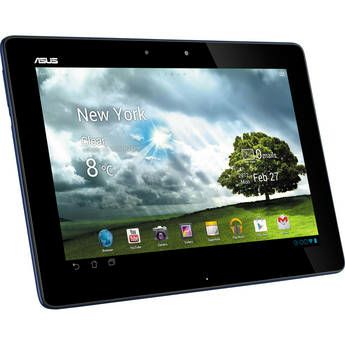 The tablet is basically a cheaper version of the Asus Eee Pad Transformer Prime. The new model has a slightly slower processor, no LED flash, and a smaller battery.

It runs Google Android 4.0 Ice Cream Sandwich software and 1GB of RAM, a front-facing 1.2MP camera and a rear 8MP camera, and GPS.

Like other members of the Transformer family, the TF300 can be used as a standalone Android tablet, or you can attach an optional keyboard docking station to use the device like a laptop while extending the battery life.

Early reviews of the new tablet seem to be generally positive, but Droid Life suggests that if you’ve got an extra $100 to spend on the Transformer Prime instead, you’ll get a better camera and much better build quality. SlashGear, on the other hand, thinks the only reason to choose the pricier tablet would be for the camera flash — if you actually care about taking photos with a tablet.

Engadget notes that while the tablet doesn’t get the same 10 hours of battery life as the Trsansformer Prime, it still clocks in at a respectable 8..5 hours.