Asus introduced the tablet in January and word on the street is that it will ship before the end of June.

While the tablet’s not yet widely available, Australian blog Ritchie’s Room has already spent some time using the Infinity — and comparing it to Apple’s latest iPad. 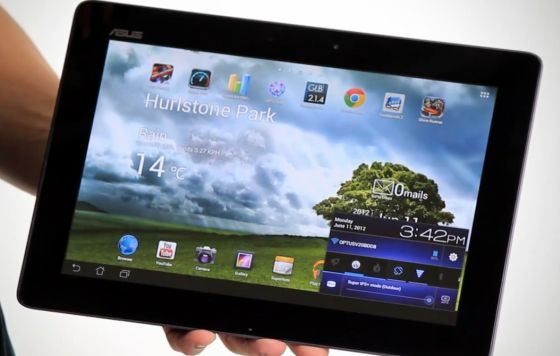 But there are a few key differences. Not only does the Infinity have a higher resolution display, it also has a plastic strip along the back where the GPS antenna hangs out to offer better GPS performance than the Prime.

The new model also has an NVIDIA Tegra 3 quad-core processor clocked at 1.6 GHz, while the Prime has a 1.3 GHz version.

Ritchie’s Room ran a series of benchmarks — and while Ritchie seemed most interested in comparing the tablet with the iPad (it came out ahead in all tests except for the graphics performance benchmark), it looks like the Infinity is also a bit faster than the Prime.

The new tablet has a Super IPS+ display and its maximum screen brightness is way brighter than that for the iPad.

On the other hand, the iPad does have a few more pixels packed into its 9.7 inch display, and Ritchie says that when you zoom into a picture at extreme levels you can see some pixelation on the Transformer Pad Infinity — something you don’t see on the iPad.

Like other members of the Transformer family, Asus will offer an optional keyboard dock for the Infinity, letting you use the tablet like a laptop while adding an extra 6 hours of battery life, for a total of up to 16 hours of run time.