The Asus Transformer Book Trio is a computer that can act as a tablet, a notebook, or a desktop. First introduced this summer, the Trio will hit the streets in November… at least in some markets.

Asus chairman Jonney Shih has announced that the Transformer Book Trio will be available in Japan starting November 2nd, where it will sell for 139,800 yen, or about $1430 US. It’ll likely cost a bit less if and when it comes to the United States. 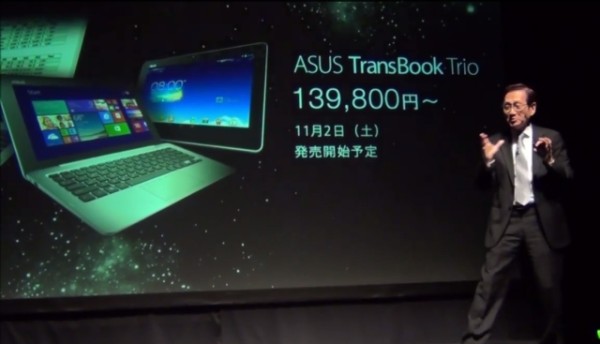 The Trio consists of two parts: an 11.6 inch touchscreen tablet and a detachable keyboard section. The tablet can be used as a standalone device that runs Google Android, but when you connect it to the keyboard it becomes a display for a Windows laptop.

You can also use the keyboard as the basis of a desktop PC — just plug in an external display and you’ve got a Windows desktop.

This works because tucked away in the keyboard section are an Intel Haswell processor, 4GB of RAM, up to 1TB of storage space, a 33 Whr battery, and other goodies including WiFi, Bluetooth, USB and audio and video ports. It basically has the guts of a Windows laptop — the only thing it’s missing is the screen.

The tablet, meanwhile, has a 1920 x 1080 pixel IPS display, an Intel Atom Clover Trail+ processor, 2GB of RAM, up to 54GB of storage, front and rear cameras, and Google Android software as well as a microSD card slot, its own WiFi and Bluetooth adapters, and a micro USB port.

Asus says the tablet weighs about 1.5 pounds and the PC station weighs about 2.2 pounds. Use them together and you’ve got a laptop that weighs less than 4 pounds, gets around 5 hours of battery life while using Windows or up to 13 hours of run time with Android.