Both versions offer up to 11 hours of battery life and include detachable keyboard docks that let you use the tablets as notebooks. 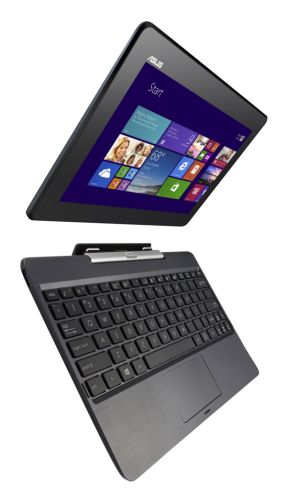 The tablet weighs about 1.2 pounds and measures 0.4 inches thick. When you add the keyboard dock the whole thing comes to about 0.9 inches thick and 2.4 pounds — or about the size of a relatively small netbook.

Don’t expect spectacular build quality. The T100 is made of plastic and the keyboard and touchpad are kind of small. But for less than $400, Asus is offering a tablet/laptop hybrid with all-day battery life, about twice the performance of notebook or tablet with a last-generation Intel Atom processor, and the ability to run most Windows apps.

It’s this kind of Intel-powered device that’s likely to kill off Windows RT for good (unless Microsoft just merges Windows RT with Windows Phone and sells it to phone makers).

There’s not much reason to buy a tablet like the Microsoft Surface which ships with a stripped-down version of Windows that won’t run most desktop-style apps when Asus is offering a similarly-priced (or cheaper) model with a full version of Windows and similar (or better) battery life.