The Asus Transformer Book is a 13.3 inch notebook/tablet hybrid with a 1080p HD touchscreen display, Windows 8 software, and an Intel Core i7 Ivy Bridge processor. Introduced in late 2012, it looks like the Transformer Book could be ready to ship soon.

MacMall is taking pre-orders for $1479.99, and according to German retailer Conrad.de, the Transformer Book could be in stock by mid-March.

Update: MacMall has removed its product page, but Asus has officially launched the Transformer Book in Japan. 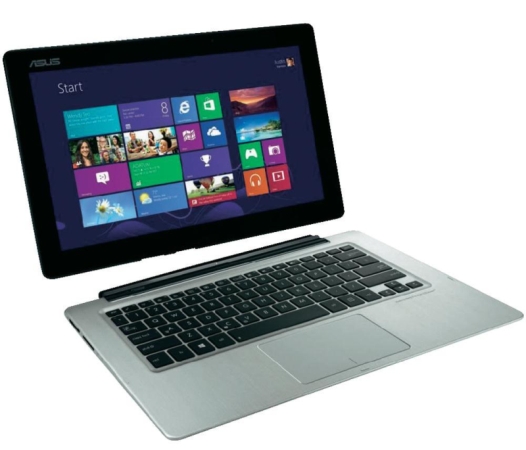 In some ways the Transformer Book TX300CA is like a very large Asus Transformer Pad tab tablet. They’re both tablets that come with keyboard docking stations that extend your battery life and let you use the device like a notebook.

But while the Transformer Pad line of tablets feature 10 inch screens, ARM-based processors, and Android software, the Transformer Book is a Windows 8 tablet with a Core i7-3517U processor, 4GB of RAM, and a 128GB solid state drive.

The keyboard dock also houses more than an extra battery — it also has a 500GB hard drive, giving the Transformer Book a total of 628GB of storage.

Keep in mind, 500GB of that disk space won’t be available if you remove the tablet from the keyboard, so you’ll want to install apps and any important documents to the SSD rather than the hard drive, but it’s nice having the extra space for music, movies, or other content.

The tablet portion of the Transformer Book includes a microSD card slot and micro HDMI port. When docked with the keyboard, you also get USB and Ethernet ports.

I got a chance to check out a pre-release model a few months ago, and while the Transformer Book is awfully big and heavy for a tablet, it seems to work pretty well as a touchscreen notebook which you can also use in tablet mode when necessary.

Asus may eventually offer a cheaper model with a Core i5 CPU instead of a Core i7 chip, but MacMall’s $1480 price tag is about what we were hearing as a possible price for this computer a few months ago.