Is your problem with today’s tablet computers that they’re just too darn small? Asus is showing off a Windows 8 tablet with an enormous 18.4 inch display.

Actually, it’s not just a tablet. The Asus Transformer AiO is an all-in-one desktop computer that just happens to have a built-in battery, allowing you to remove the screen from a base station and use it around the house without a power cable. 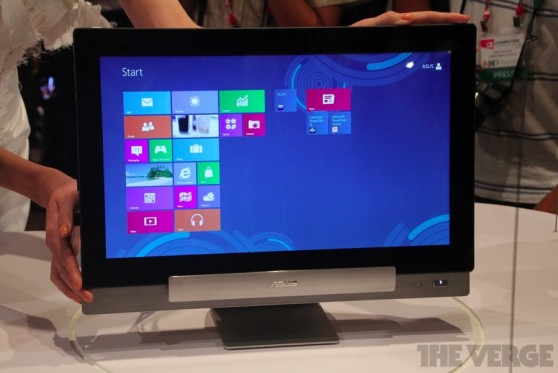 I wouldn’t expect stellar battery life from a tablet with a screen that large, but since most desktop PCs are pretty much glued to your desk 24/7, the Transformer AiO will probably get better battery life than your current solution.

The computer has an Intel Ivy Bridge processor, discrete graphics and Windows 8 operating system. Oh yeah, when you take the computer out of its dock, the operating system switches to Google Android, so you can run thousands of Android apps on the capacitive 10-point multitouch display.

The Verge reports that right now the Transformer AiO is just a prototype, but the final version will also sort of let you use Windows 8 in tablet mode – by using a remote control app within the Android environment.

According to a video from ARMDevices, it appears that the Windows operating system might actually be running on the base station itself, while the tablet has its own processor and OS. The tablet acts like a touchscreen monitor when docked, but can also connect to the base station wirelessly if you want to use Windows 8 on an 18 inch tablet.