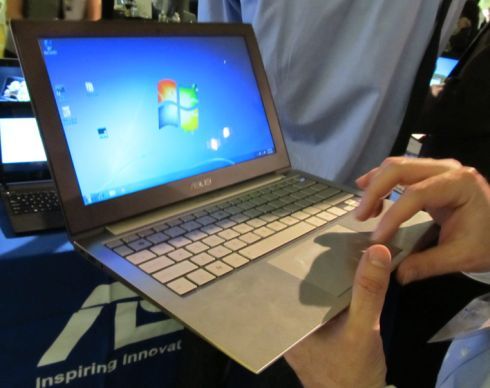 Intel is pushing ultrabooks as a new category of thin, light, and affordable laptops with fast processors and fanless case designs. Imagine a computer that weighs about as much as a netbook but which packs as much power as a full-sized laptop and has a larger display and keyboard to boot. That’s an ultrabook.

While several companies are working on ultrabooks, Asus is expected to be one of the biggest players in the field. The company has been showing off the 11.6 inch UX21 ultrabook for months, although it has yet to go on sale. Asus is also working on a 13 inch model called the UX31.

Now the Financial Times and DigiTimes are both reporting that those two laptops won’t be alone. Asus is apparently planning on launching between 5 and 7 different ultrabook models in October, with prices starting at $799, but going all the way up to $1999.

Intel had initially promised that ultrabooks would sell for under $1000, but computer makers have reportedly been pushing back against that price, claiming the components are too expensive to meet that target. Now it looks like we may see entry-level ultrabooks for under $1000, but higher-end systems with more features selling for considerably more.

Honestly though, at that point does it make sense to call them ultrabooks? Aren’t they just ultraportable laptops? That’s a category that’s been around for years, and which was defined by size and weight, not by price.

Overall I’m happy to see that Intel and its partners are taking a netbook-like approach to higher performance machines and trying to push lower cost options that might not have all the bells and whistles. But even a $799 laptop isn’t exactly cheap.

You can pick up a decent netbook for under $300, and if you’re not as concerned with portability, there are plenty of excellent 15 inch laptops for around $500. It should be interesting to see whether ultrabooks really capture any market share in the next few years.