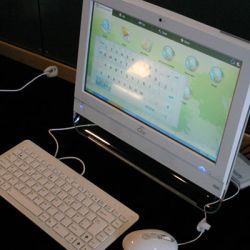 The first version of the Asus Eee Top all-in-one desktop computer/monitor/media center hasn’t even begun shipping yet. But already Asus is looking ahead to the next generation. Electric Pig reports that Asus plans to bundle a wireless keyboard and mouse with the next version of the Eee Top to make it easier to interact with the £400 desktop without being tethered to it by USB cables.

And the computer itself will be untethered from its own power cable too. Asus plans to add a battery pack so that you can pick up the computer and carry it around the house.

I don’t expect this computer to get the 5+ hours of battery life that you can get on some Asus Eee PC netbooks. But I’m of the opinion that some battery is better than no battery. After all, this isn’t a netbook or even a laptop. And it’s not really meant to leave the house. But I love the idea of being able to pick up your computer and move it from one room to another. In fact, if you carry the concept to its logical conclusion, this could be the future of all desktop computers – and it could lead to a resurgance in desktops. After all, if the netbook is the new laptop (light enough to throw in a bag and carry with you, and with a long lasting battery for long trips), the battery powered desktop could be the new laptop (too heavy to really take out of the house very often, but usable either on a desk in your home office or on the kitchen table).