After launching in the UK and Europe earlier this year, the Asus Tinker Board is now available in the United States.

This $60 mini computer looks a lot like a Raspberry Pi, but it has twice as much RAM as the Raspberry Pi 3, a Rockchip processor instead of a Broadcom chip, and a few other special features including support for 192KHz/24-bit audio and Gigabit Ethernet.

It’s also one of the first devices in this category to come from a company best known for making consumer PCs. 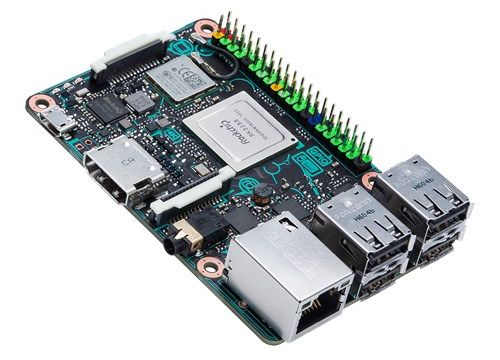 The Tinker Board has a Rockchip RK3288 quad-core processor with Mali-T764 graphics. That’s the same chip used in the original Asus Chromebook Flip, as well as several other Chromebooks and an awful lot of Chinese tablets.

The system features 802.11b/g/n WiFi, Bluetooth 4.0, four USB 2.0 ports, a micro USB port, and a microSD card slot (which is used to store the operating system, and everything else: like the Raspberry Pi, the Tinker Board has no built-in storage.

It also has a Raspberry Pi-like 40-pin expansion connector, although it’s unclear if Raspberry Pi HATs will work with the Tinker Board.

Asus offers a Debian Linux-based operating system called TinkerOS for the little computer. You may be able to try other operating systems as well, but that’s what’s officially supported.

The Tinker Board is aimed at hobbyists looking to build their own devices powered by an inexpensive, low-power computer system. Since the Tinker Board is about the size of a pack of playing cards, it could fit into a media player, surveillance system, or other IoT products.