Asus already sells a line of gaming desktops, laptops, and smartphones under its Republic of Gamers (ROG) brand. What’s next? An Asus ROG tablet.

A few months ago Evan Blass posted a leaked picture of an unannounced Asus ROG Flow X13 tablet with built-in kickstand and a detachable keyboard. Now Asus has posted its own teaser a few days ahead of the 2022 Consumer Electronics Show, suggesting that an official launch is imminent. Update: The Asus ROG Flow X13 gaming tablet is now official. 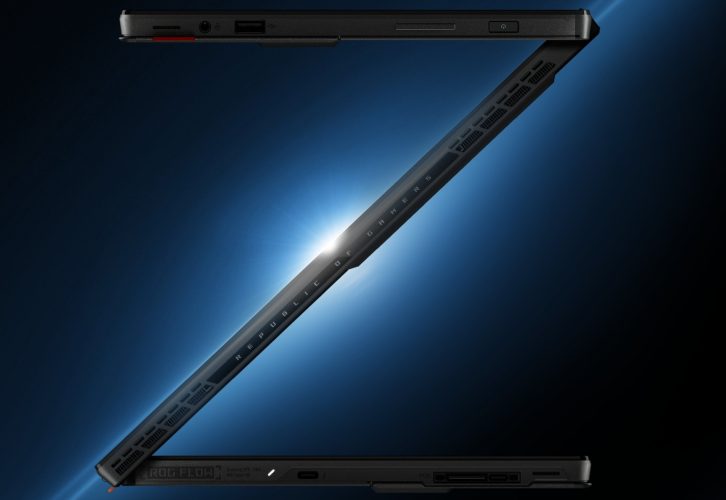 While no specs are available yet, the tablet appears to have at least one USB-C port, one USB-A port, a headset jack, what looks like a microSD card reader or two (or maybe a SIM card slot). The top edge of the tablet also appears to have plenty of ventilation, hinting that the tablet will feature active cooling with a fan or two inside the case.

There’s also a proprietary port that will most likely allow you to connect an external graphics dock like the Asus XG Mobile, much the way you can with last year’s ROG Flow X13 thin and light gaming laptop.

+ ROG Flow Z13 (not to be confused with Flow X13) pic.twitter.com/DLH7fmNHVt

While the teaser image posted by Asus doesn’t show a keyboard, the picture shared by Evan Blass earlier this year shows what looks like a Microsoft Surface Pro-style detachable keyboard which can be connected to the tablet magnetically.

The world’s most powerful gaming tablet is coming to #CES2022.
Full reveal at the #CES2022ROG virtual launch event, January 4, 11AM PST.
👉 https://t.co/tVAhAej7zY#TheRiseOfGamers pic.twitter.com/4bRhKMqMUQ

For what it’s worth, I’ve also found a few clues suggesting that other new products scheduled for introduction next week could include: