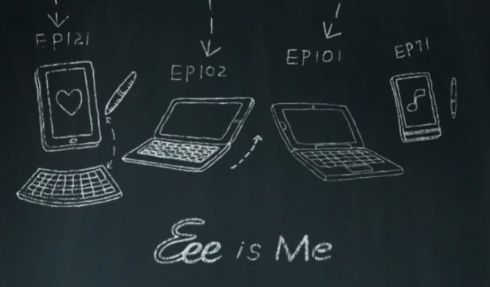 Asus is set to unveil a new line of tablet computers next week at CES. The company teased us with a video of the 12.1 inch EP121 a few days ago, followed by a few close-up photos of various tablets. But the company also did something a little sneaky — a day after uploading the teaser video for the company’s new Eee Pad Ep121, Asus uploaded a second version of the video with chalk drawings of four tablets toward the end.

As we already knew, the EP121 will be a tablet with a large display and an (optional?) keyboard docking station. The company is also set to launch a line of smaller tablets, and now we have a few names.

The Eee Pad EP102 appears to have a slide-out keyboard. The video features a brief animation of the machine transforming from a slate into a machine with a screen and a physical keyboard.

The EP101, on the other hand, appears to have a detachable keyboard, much like the larger EP121. If Asus is sticking with its usual naming conventions, the EP10x models will have 10 inch displays.

The EP71 doesn’t appear to have any sort of keyboard, but unlike the others it has a stylus, which would seem to indicate that this model could have a resistive display, an active digitizer, or one of those newfangled capacitive displays with support for a stylus (or maybe just a special capacitive stylus). It will probably have a 7 inch screen.

Update: It looks like the updated video has been removed.  You can check out the original video after the break.