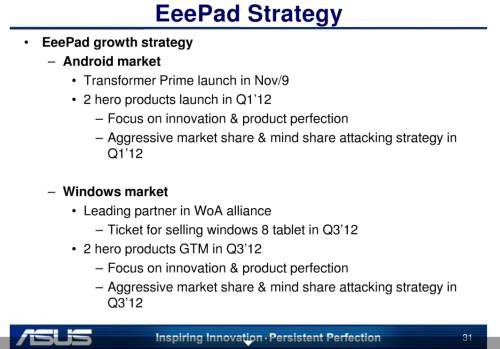 Asus has released its financial results for the third quarter of 2011, and the company beat its forecast for net profits. The company also revealed some interesting figures about product shipments. 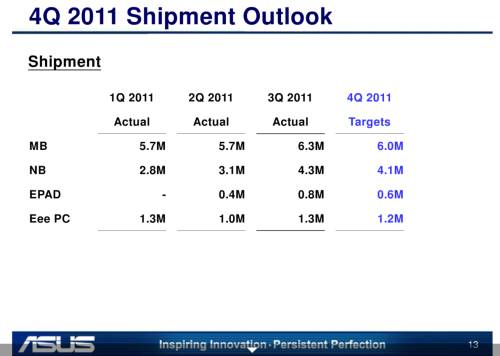 In other words, despite the fact that tablets grab more headlines than netbooks these days, that doesn’t mean mini-laptops aren’t shipping. It may just be evidence that the market has matured and it’s not as exciting as it once was.

Speaking of which, Asus hasn’t made any announcements about upcoming netbooks… but the company does plan to formally launch the Eee Pad Transformer Prime Android tablet on November 9th. The tablet will have a 10 inch display, an NVIDIA Kal-El quad-core processor, and an optional keyboard docking accessory that lets you use the tablet like a laptop.

Asus is also looking ahead to 2012, when the company plans to launch two major Android products in the first quarter. It’s likely that at least one of those devices will be the Asus Padfone, which is a two-piece device that functions as a smartphone and a tablet, similar to the way that the Asus Eee Pad Transformer can be used as a tablet or a laptop.

In the third quarter of 2012, Asus also plans to introduce a tablet running Microsoft Windows 8, as well as other Windows products.