There are a few different ways to design a notebook so that it can also be used as a tablet. You can offer a detachable keyboard, a hinge that lets you twist the screen and push it down over the keyboard, or a design that lets the screen rotate within its frame.

Asus opted for a different option with its new TAICHI series ultrabooks. There are two displays: one on each side of the laptop lid. 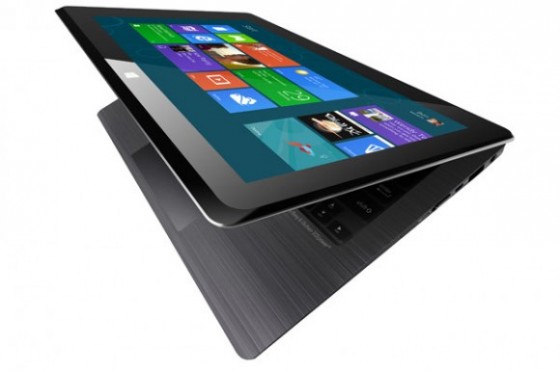 Interestingly, you can display separate content on each screen — which means that you can also share the computer with a friend sitting across the tablet from you while one of you plays a game and the other surfs a web. I imagine this would also be a killer setup for some Battleship-style video game.

While you’d think a computer with two touchscreen LCD displays would be a bit on the thick side, the Asus TAICHI doesn’t look any thicker than any of the company’s Zenbook ultrabooks.

There’s no word on the price or release date, but since the TAICHI notebooks appear to be running Windows 8, it’s likely that they won’t be available until this fall at the earliest.

11 replies on “Asus TAICHI packs two displays into one ultrabook”