The Asus Tablet 810 looks like a slightly larger version of the Asus Tablet 600, but there are four key differences between these tablets:

The larger screen makes the tablet… bigger. But since both tablets have the same 1366 x 768 pixel display resolution and Super IPS+ display technology, you might not notice a huge difference at first glance. 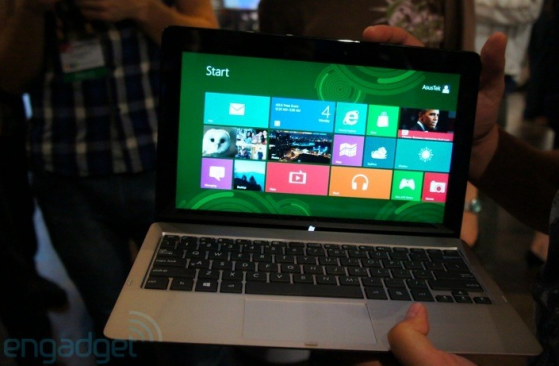 But thanks to the Wacom digitizer, the Asus Tablet 810 can support both finger and digital pen input. You can use the pen to write or draw on the screen, hover a mouse cursor, select multiple check-box items, and generally use the tablet as if a mouse was plugged in. But you can also pinch to zoom, flick, and perform other finger-friendly gestures.

The Medfield processor in the Tablet 810 is a low power chip that’s not going to offer stellar performance while running legacy Windows apps. But unlike the Asus Tablet 600, which has an NVIDIA Tegra 3 ARM-based processor, the Tablet 810 can run older apps designed for computers with x86 processors.

Endadget reports that the Asus Tablet 810 has 2GB of RAM, a 64GB solid state disk, 2 USB ports, a microSD card slot, a 2MP front-facing camera, and an 8MP rear camera with flash.

The tablet is also pretty thin, measuring just 8.7mm, or about 0.34 inches thick. And like most of the tablets we see from Asus these days, there’s an optional keyboard docking station which lets you use the tablet like a notebook. The dock also adds additional ports to the tablet.