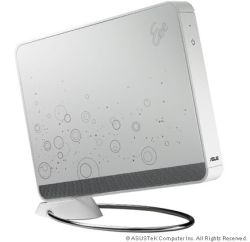 As expected, Asus has added a new version of its Eee Box to its lineup of low power, low profile desktops. The Asus Eee Box B203 is pretty much identical to the original Eee Box B202 except it’s powered by an Intel C220 Celeron processor instead of an Intel Atom chip.

The rest of the specs look pretty standard. The nettop runs Windows XP Home (even though the product page says Asus “recommends” Windows Vista) and comes with an 80GB, 120G, or 160GB hrd drive. You get 4 USB ports, a flash card reader, a DVI output, and Ethernet and WiFi connectivity in a 2.2 pound package.

The Celeron model will likely sell for a few bucks less than the Atom version, while freeing up a few more Atom N270 chips for use in netbooks.