Asus is updating its ROG Zephyrus line of thin and light gaming laptops with new models sporting the latest Intel and NVIDIA chips. But one of the most curious models is the new Asus ROG Zephryus G.

It’s an entry-level model that has a plastic and brushed metal chassis rather than the magnesium alloy material used for more expensive models. But it’s still compact for a 15.6 inch gaming laptop, measuring about 0.8 inches thick and weighing about 4.6 pounds.

The Asus ROG Zephyrus G is also a relatively rare beast: a gaming laptop that has an AMD Ryzen processor and NVIDIA graphics.

At launch Asus plans to offer a model with an AMD Ryzen 7 3750H processor and NVIDIA GeForce GTX 1660 Ti graphics for $1,199, but Engadget reports that lower-priced configurations may be available in the future. 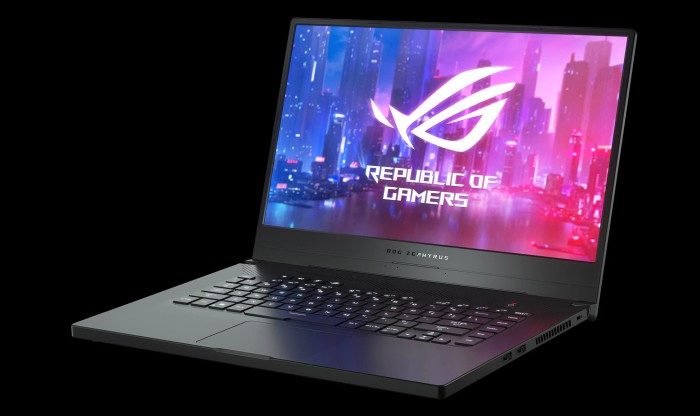 While other new laptops in the Asus ROG lineup feature 9th-gen Intel Core H-series processors, the Zephyrus G uses AMD’s most powerful Ryzen Mobile chip to date. The Ryzen 7 3750H is a 35 watt 4-core/8-thread chip with a 2.3 GHz base clock speed and support for boost speeds up to 4 GHz.

It also features Radeon RX Vega 10 graphics, which will likely offer decent performance for non-gaming tasks. But the discrete NVIDIA graphics card will kick in for gaming, video editing, or other tasks that need a little more horsepower.

If you’ve got more money to spend, the new Asus Zephyrus M and Zephyrus S laptops are a little thinner, a little lighter, and significantly more powerful.

You can read more about the latest gaming laptops from Asus in the company’s press release.