A handful of companies have released smartphones aimed at gamers over the past year or two. The ASUS ROG Phone really seems like one of the first to earn that title.

In addition to flagship-class specs, the phone features Air Trigger buttons that you can use to perform actions while gaming, a docking port that lets you connect game controllers and/or an optional cooler to keep the phone from overheating, and an Asus Republic of Gamers logo on the back of the phone that lights up.

Asus announced the phone in June, and now the company plans to hold a US launch event for the ROG Phone on October 18th. 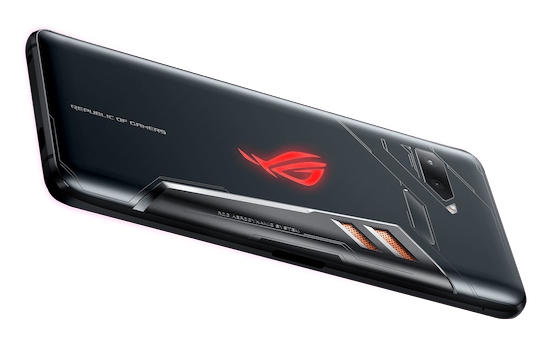 We’ll probably have to wait until then to find out about the US pricing and release date for the phone. But we already know the key specs:

The ROG Phone has an 8MP front-facing camera and dual rear cameras including a 12MP 83-degree primary camera with optical image stabilization and a secondary 8MP camera with a 120 degree wide-angle lens.

Other features include support for 192kHz/24- it audio, 802.11ac WiFi, Bluetooth 5.0, NFC, and GPS. The phone supports dual SIM cards and head a headphone jack, but there’s no microSD card slot.

It features a USB 3.0 Type-C port for charging and data and the phone comes with a 30 watt power adapter for fast charging.

There’s also a docking port on the phone that you can use to attach optional accessories including the AeroActive Cooler, a Gamevice controller that adds physical gaming buttons, a TwinView dock that adds a second screen for viewing chat windows or other content while using the primary screen for gaming, and Mobile Desktop dock that lets you connect a mouse and keyboard for PC-style gaming.

Could you make the case that all of this is overkill for a smartphone, since most mobile games are designed to run on hardware that doesn’t have all these features? Yes. Yes you could.

But with a growing number of PC games being ported to mobile platforms, the ability to add custom cooling, controls, and other features such as improved audio and video capabilities to smartphones could certainly making extended Fortnite or Civilization 6 sessions a little more enjoyable.

2 replies on “Asus ROG Phone is coming to the US”