According to NVIDIA, there are more than 40 new laptops featuring GeForce RTX graphics on the way, but one isn’t really a laptop so much as a multi-function tablet with a detachable keyboard.

Weighing in at 10.3 pounds, this isn’t exactly the most portable “desktop replacement.” In fact, you could probably argue that it is a desktop — there’s a built-in kickstand that lets you prop up the tablet like a monitor. But the detachable keyboard and built-in battery mean that theoretically you could use the Asus ROG Mothership on the go as well… at least for a little while. 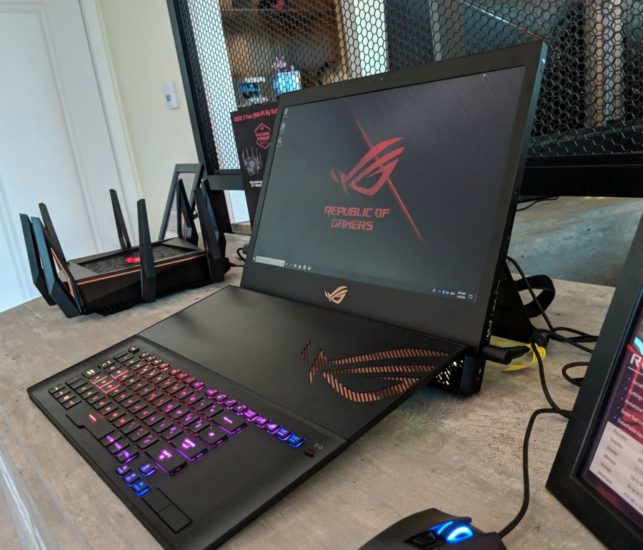 Asus says it got the idea for this device after noticing that many gamers already use an external keyboard and display with their “desktop replacement laptops.”

One reason is that some gamers prefer the keyboard to be positioned to one side of the screen and at an angle to it. A detachable keyboard lets users adjust the placement of the keyboard. And the keyboard itself can fold in half when it’s not attached to the laptop, reducing the amount of space it takes up.

The tablet-style design also aids in cooling since it allows for exhaust vents near the top of the system.

Update: I spotted one in the wild… and it is really far too big to think of as a tablet. It’s more of a smallish desktop monitor that happens to have a battery so that it’s theoretically portable.