Asus appears to be planning to expand its line of Android phones and tablets. That’s not a surprise — the company’s been offering Android devices in a range of sizes and shapes for the past few years.

But if a product roadmap shown off recently is anything to go by, it looks like the company plans to add a new product category and spruce up its existing categories with a few new models. 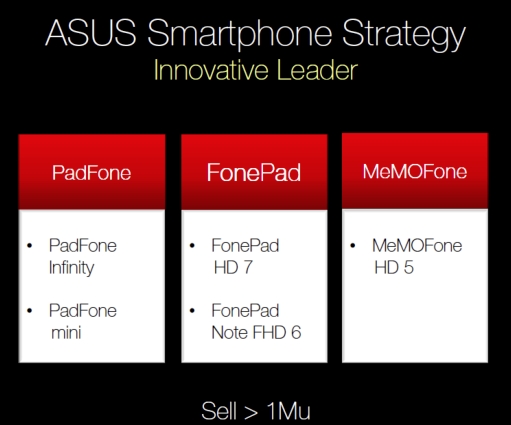 Right now Asus offers a line of small tablets under the MeMO Pad name. Soon it looks like it will expand that brand to include a smartphone called the MeMOFone HD 5.

Details are thin at the moment, but it sounds like we can expect a phone with a 5 inch, HD display. It’ll also probably have a low price tag — the MeMO Pad tablets are all reasonably inexpensive, with the new MeMO Pad HD 7, for instance, selling for just $149 in the United States. 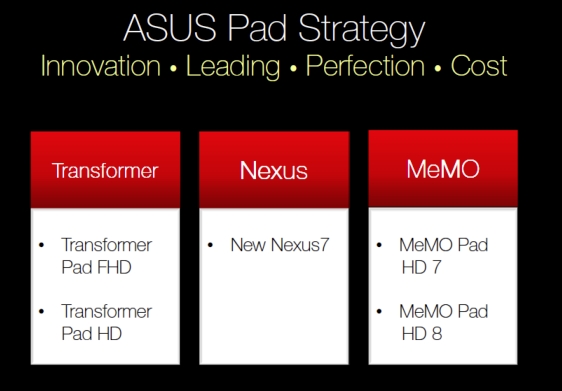 Speaking of the MeMO Pad budget tablets, it looks like Asus plans to launch an 8 inch model.

Android tablets with 8 inch displays often take a page out of Apple’s playbook and offer 4:3 aspect ratio displays instead of the usual 16:9 or 16:10 displays that are more common for Android devices. It’s not yet clear whether that trend will influence the upcoming 8 inch tablet from Asus.

The Asus PadFone line of devices straddle the line between phones and tablets. The PadFone itself is an Android smartphone with a high resolution display and a speedy processor, but what makes it really special is the PadFone Station.

That’s a tablet-sized dock. Tuck the phone into the docking port and you can run all the same apps, access the same data, and generally use your phone as the brains of a 10 inch tablet.

Since the tablet dock also has its own battery, you can extend your phone’s battery life by using the dock.

According to the product roadmap, there’s a new model called the PadFone mini on the way. It’s not clear if that means we’ll see a smaller phone, or a smaller tablet dock. Either way, think small(er).

Leaving no combination of words unturned, Asus also recently introduced the FonePad, a 7 inch tablet that has a cellular radio which you can use to make phone calls. Basically it’s an enormous phone with a screen larger enough to use as a tablet.

Now it looks like Asus is going to offer a smaller model for folks that think 7 inches is a bit big for a phone. The Asus FonePad Note FHD 6 is on the roadmap.

The addition of the “Note” to the name could also be a sign that this model will support a stylus or digital pen, much like Samsung’s Galaxy Note devices.

Interestingly, when Asus first introduced the MeMO Pad brand, the company was sort of focusing on the “memo” aspect and suggesting that those models would include some sort of stylus. But by the time the first MeMO Pad tablets actually shipped, they were stylus free. 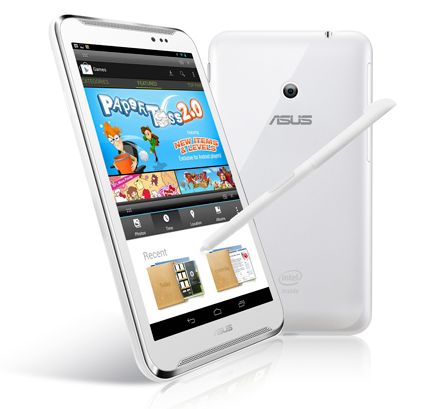