But those features aren’t what truly make it stand out. That would be the NVIDIA Quadro RTX 6000 graphics processor. This is the first laptop announced with NVIDIA’s new GPU that sports 24GB of dedicated memory.

The Asus laptop is actually based on NVIDIA’s new “ACE” Reference design, which means we could see models with similar specs in the future. But for now the Asus ProArt StudioBook One is a one-of-a-kind laptop. 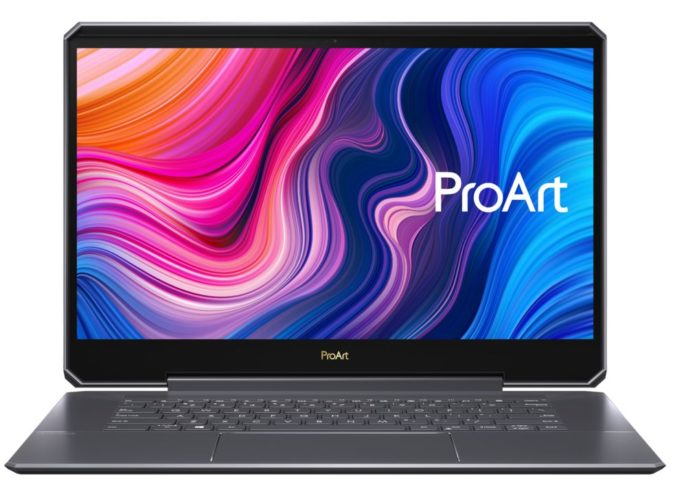 NVIDIA isn’t sharing detailed specs for its new GPU yet, but the company says the GPU offers performance that’s about 10-percent lower than what you’d expect from a desktop Quadro RTX 6000 GPU.

While pricing and availability details aren’t available yet, it’s fair to say that this laptop is going to be expensive.

In addition to the specs listed above, the Asus ProArt StudioBook One features a PANTONE-validated display with a 120 Hz refresh rate and 100-percent Adobe RGB color gamut, a 90 Wh battery, a 300-watt power supply, three Thunderbolt 3 ports, a Precision Touchpad, and a backlit keyboard.

Thenotebook measures 14.4″ x 9.7″ x 1″ and weighs about 6.4 pounds. And it features a dual-fan cooling system with titanium vapor chambers. Asus says the system is also designed to run quietly, with less than 46 dB of noise.

Interestingly, the guts of the laptop seem to be in the display section, rather than the keyboard. Among other things, that helps with the unique cooling system, which draws air in through the bottom of the lid.