Asus has unveiled the Italian prices and launch details for three upcoming Android tablets. Unfortunately we still don’t have details about the US launches for the Asus Padfone, Transformer Pad TF300T, or Transformer Prime Infinity. 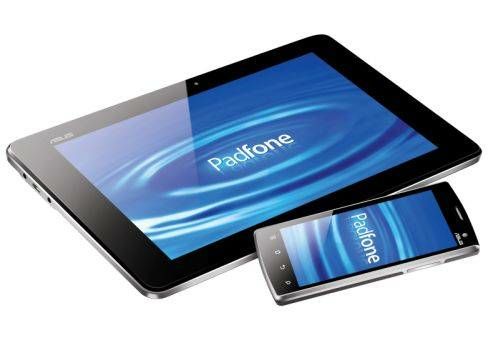 The Padfone is the most unusual device of the bunch. It’s a 4.3 inch Android smartphone that slides into a 10.1 inch tablet docking station. The processor and storage are all on the phone, so you don’t have to sync any data. But when you want a big screen or extended battery you can use the dock.

Asus already announced that the Padfone will go on sale in Taiwan this month for $610 (phone only) to about $950 (for the phone, tablet dock, and an optional keyboard dock).

Bear in mind, that’s the price without any wireless carrier subsidy. Consumer electronics also tend to be priced higher in Europe than the US, so there’s no reason to think the Padfone will cost $900 if and when it’s released in the US.

Next up is the Asus Transformer Pad TF700T. This is a new version of the Asus Eee Pad Transformer Prime with a high resolution, 1920 x 1200 pixel display. It has the same NVIDIA Tegra 3 quad-core processor, 8MP camera, and other premium features.

Last, and possibly least, Asus will begin seling the Transformer Pad TF300T in Italy in May. The tablet will have a starting price of 399 Euros, or about $520.

The TF300T is basically a stripped down version of the Transformer Prime, with a lower quality display, camera, and a slightly slower processor.

Asus is expected to begin offering the Transformer Pad TF300T in the US on April 22nd for $379 and up. But this is the first time I’ve seen European launch details for the new tablet.