The Asus Padfone isn’t expected to ship until February, but it looks like someone at Asus may have been testing an early unit. Some benchmark results have shown up at the GLBenchmark website. 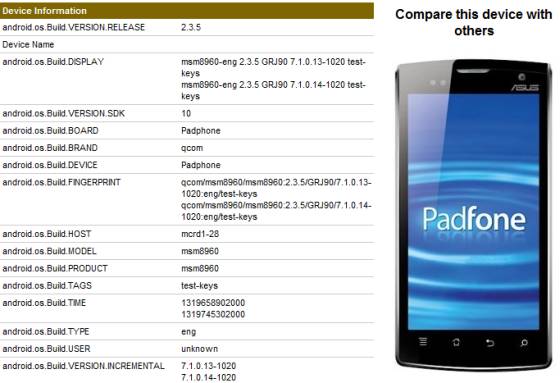 The Padfone is a smartphone-tablet hybrid. It includes a fully functional Android smartphone, along with a tablet docking station. Just slap the phone into the docking station and you can use a higher resolution 10 inch display instead of a 4 inch phone screen. The dock also has its own battery.

But the phone is actually the brains of the operation. The processor, storage, memory, and operating system are all running on the phone, which means you don’t need to synchronize your data between a phone and a tablet… because the phone is the tablet.

According to the GLBenchmark listing, the phone portion of the Padfone has a 960 x 540 pixel display and a Qualcomm MSM8960 processor. It’s currently running Androi 2.3.5, but the Padfone is expected to ship with Android 4.0 Ice Cream Sandwich.

Right now it also appears to have a top clock speed of 918 MHz, but that could change by release.