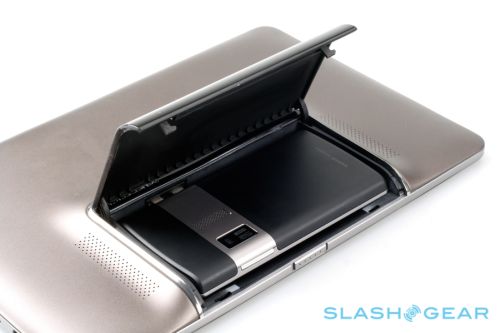 You know that smartphone/tablet combination device Asus has been teasing us with for the past few days? The company is set to officially announce it tomorrow, but a series of pictures has leaked out in advance of the press conference giving a much better idea of how the whole thing works.

Apparently what we have here is an Android tablet with a compartment for a smartphone. It looks like the phone may actually contain the operating system, storage, and other components, while the tablet offers a larger screen and battery. You can sort of think of the PadFone as an extension of the Asus Eee Pad Transformer modus operandi — but instead of offering a tablet which can turn into a laptop when you connect a docking station, the PadFone gives you a phone that can turn into a tablet.

We don’t have any detailed specs yet, but it looks like the tablet has a 10.1 inch display, front and rear cameras, and an HDMI Port.

You can find more high resolution photos at SlashGear and PocketNow.