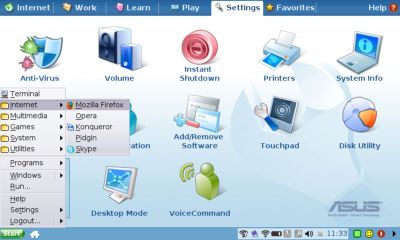 There’s been a lot of talk over the last few months about the future of Linux on netbooks. When the OLPC Foundation, Asus, and other early netbook makers decided to preload various Linux distributions instead of Windows on the earliest netbooks, there were a few goals. The OLPC Foundation wanted to embrace open source ideals while keeping software licensing costs to a minimum. Asus wanted to design a custom user interface that was easy to use even by people with little to no computer experience. And to keep the software licensing costs down so the company could sell cheap computers without cutting too deeply into the profit margin.

But a year later, most netbook makers offer Windows as an option. And in October an official with MSI said the company was seeing Linux versions of the MSI Wind laptop returned four times more often than Windows models. And then Canonical, the company behind Ubuntu Linux essentially confirmed that Linux notebooks are returned more frequently than Windows laptops.

So what’s going on here? It’s hard to say, because nobody’s really pinpointed why MSI and Canonical say Linux models are returned more often. It could be due to the fact that the MSI Wind U90 with SUSE Linux Enterprise Desktop was half-baked. The operating system didn’t suit the hardware, and some components, like the webcam, just didn’t work out of the box on Linux models. Or it could be due to the fact that manufacturers and retailers aren’t doing a great job of communicating the differences between Linux and Windows machines to consumers. While many people will find that a Linux computer does everything they need it to, the last thing you want to do is walk into a store and purchase a computer only to take it home and realize for the first time that it has a completely unfamiliar operating system and can’t run some of your favorite programs.

My guess is that Asus has simply done a better job of marketing their Linux machines, so that customers have a good idea of what they’re getting.