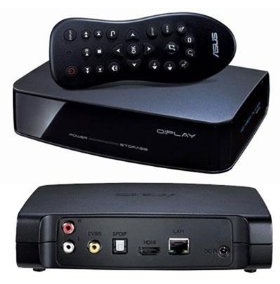 Update: I’ve been informed that Asus is working on a series of firmware updates that may address some of the issues highlighted in this review.

The Asus O!Play is a media player that you can use to stream digital media to your standard or high definition TV. Just plug the O!Play into your TV using the included composite cables or an HDMI cable (not included) and connect a USB flash drive or USB hard drive with pictures, music, or movies.

For about $100 (Amazon), if that’s all the O!Play did, it would be a halfway decent deal. The little box can handle a wide array of audio and video formats including MPEG1/2/3, DiVX, XViD, and H.264 and it can connect to USB and eSATA drives. But the O!Play also has an Ethernet port which lets you play media stored on a shared network drive. In other words, if you’ve got a computer running in your bedroom or office that has your music and video collections on it, you can use the O!Play to access that media in your living room without putting a PC by your television.

If you don’t want to run cables throughout your house you can always move the router into the living room or pick up a cheap Powerline adapter which makes your home electrical wiring function as an Ethernet extension cord. You can plug a Powerline adapter into your router and another into a wall socket near your TV and just run a short Ethernet cable from the adapter to the O!Play.

At $100, the O!Play is the cheapest device I’m aware of that lets you stream media from a shared network drive to a computer. Western Digital just released a similar box, but it runs $120. And the Netgear Digital entertainer Live EVA2000 supports similar features and then some, plus WiFi networking with an optional adapter, but has a list price of $180 without the WiFi adapter.

I was pretty excited when Asus sent me a demo unit to test, as I just finished setting up a new TV in the basement that I plan to use while exercising. I already have a PC plugged into the TV in the living room, and it has a digital TV tuner for recording over-the-air broadcasts. But I wanted an easy way to watch them on the basement TV, and the O!Play seemed like just the ticket. Plus it would let me access my music collection.

But after playing with the Asus O!Play for a while, I’m not that impressed with the software interface. Don’t get me wrong, in many ways, the O!Play works exactly as promised. It can stream audio and HD video smoothly over a home network. But the interface is clunky. It can take a long time to find the files you’re looking for, and the on-screen menus leave a bit to be desired.

For instance, I have about 400 folders in my music directory with different artists and albums. When you want to listen to a song, you have to select the music player, and then sit there holding the arrow key indefinitely until you find your folder. It takes half an eternity to scroll through 400 folders because no matter how long your finger is on the key, the O!Play software scrolls at a constant speed. In other words, if you want to listen to They Might Be Giants, and you have an extensive collection of albums from artists with names starting with A – S, you might have to wait a few moments. 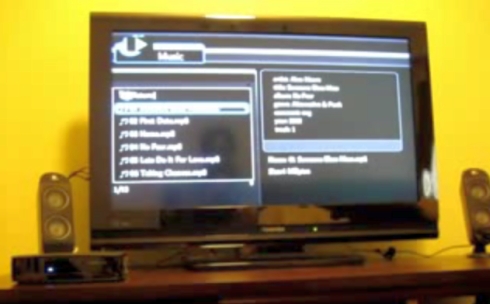 Fortunately, you can add directories to a shortcut menu, which can save you a little time in some situations.

Video playback was excellent. While most of my videos are in DiVX, the O!Play was even able to handle uncompressed transport streams recorded using my TV tuner and BeyondTV software. But if you have a large video collection you’ll have to deal with the same navigation problems that you have with large music folders. 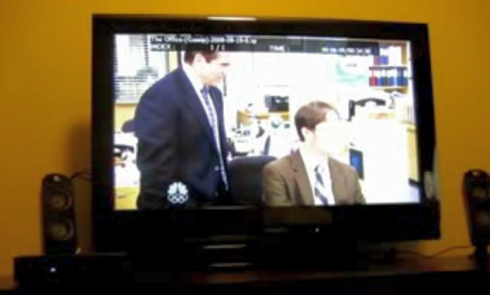 You can fast forward, pause, or rewind video at 1.5x, 2x, 4x, 8x, 16x, or 32x speeds. But I kind of wish there was a TiVo-like progress bar to let you know where you are in a video. You can hit the Display button on the remote control to bring up a widget that tells you the current time in the video (for instance, 3:32 of a 34:00 video). But in order to keep this widget active you need to hit fast forward before hitting display, not the other way around.

For some reason I had horrible results when I tried to view a picture. I navigated to a network drive that has all of my photos, and images that look excellent in Windows Media Center looked horribly pixelated on the O!Play. These were JPG files I shot with my digital camera.

There’s a zoom button on the remote control that lets you focus in on a particular portion of an image. There are several zoom levels and when you hit the top one, hitting the zoom button one more time takes you back to the 100% view. There’s no dedicated button for zooming out, so you’ll have to cycle through the zoom levels if you want to go back to normal.

You can set up photo slideshows or just view a single image.

Pretty much all of these issues are software issues and could be addressed in future firmware updates. Asus isn’t making any promises, but when I contacted the company about the problem finding files in large directories, I was told that they would look into it. It’s possible that the company could make it easier to jump to a specific letter in the future, or adjust the scrolling speed. 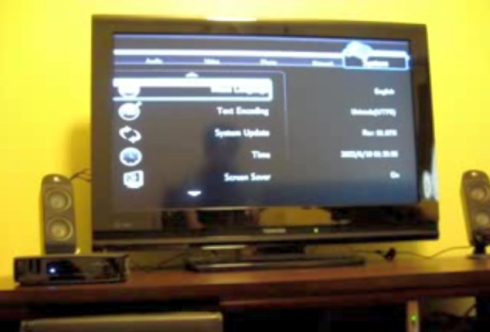 On the bright side, setting up the O!Play to connect to a home network was quite easy. You just enter the Setup menu and either let it auto-detect your settings or enter an IP manually. If your network hard drives are password protected, an on-screen keyboard will pop up asking you to enter your username and password.

I barely had to glance at the user manual to use the O!Play. Most of the controls were quite intuitive. One thing that I learned from the user manual that wasn’t obvious was that if you hit the OK button on a file, it will play that audio or video file and then stop. If you hit the play/pause button instead, it will play all of the files in the folder. So if you want to play an entire album, make sure to hit play/pause instead of OK. 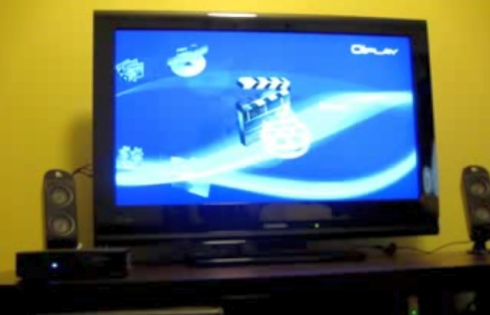 If you’re looking for a budget media streaming device with network connectivity, the Asus O!Play could do the trick. But I’m hoping for a firmware update that will make the device easier to use. Fortunately, you can easily updated the firmware from the Setup menu when the box is connected to your home network.

The other thing worth pointing out is that the software is based on Linux, and some folks are already looking into the possibility of adding functionality or even creating a whole new custom Linux operating system for the O!Play. You can read much more about hacking the O!Play from Liliputing reader Mikez in the comments on my unboxing post and at the NetbookUser forum.

I shot a video of the O!Play user interface this afternoon. Pardon the video quality, but this is what happens when you sit in a poorly lit room and point a standard definition digital camera at a high definition TV. The one thing I want to point out is that near the end of the video I complain about the pixelated images of my cat. They look much worse in real life than they do in this video.