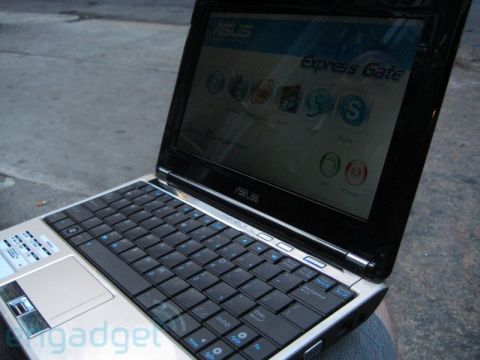 Asus has been making the rounds showing off its upcoming N10 notebook. And the company has a message: it’s not a netbook. Sure, it has a 10.2 inch, 1024 x 600 pixel display and a 1.6GHz Intel Atom processor just like the Asus Eee PC 1000/1000H. And sure, it’s got a starting price of around $599, which makes it cheaper than several netbook models from HP. But it’s not a netbook, because Asus says it isn’t. OK?

I mean, I guess I should cut the company some slack, because it did practically create this product category. But if you really want to differentiate your product class, you’re going to have to do more than slap a shinier case, a more powerful graphics card, and a larger hard drive in there. The $599 version of the Asus N10 (which will apparently be called the N10E) really looks an awful lot like an Eee PC 1000H on the spec sheets. You have to pony up an extra $100 or $200 for the N10J to get the good stuff like an HDMI port, a RAM upgrade, and a fingerprint reader.

I can think of two reasons why Asus might not want to call this a netbook. First, because the company plans to release additional models in the N10 series that will be larger and heavier. And second because up until last year, Asus was best known as a motherboard maker. The Eee PC has helped Asus show the world that it can make laptops. Cheap, low profit-margin laptops. I wouldn’t be surprised if Asus, which has been making full sized laptops for a while, decided to introduce a new model that blurs the line specifically to get a lot of attention for a new netbook-sized device while taking the opportunity to point out that Asus does make traditional laptops which sell for a few bucks more and have a higher profit margin.

Still, Engadget, Geek.com and Laptop Magazine all came away from their presentations with Asus impressed. So whether you call it a netbook, a notebook, or a submarine sandwich, the Asus N10 looks like a machine worth checking out. It should be available later this month or early in October.

3 replies on “Asus N10 isn’t a netbook, it just looks and acts like one”