The Asus MeMO Pad 8 ME181C is an Android tablet with an 8 inch display, an Intel Atom Bay Trail processor, and a $199 price tag.

It’s also a surprisingly powerful machine for the price. Or maybe that shouldn’t be a surprise: after all the tablet has the same processor as the Asus Transformer Pad T100 — a 10 inch Windows tablet that can basically replace a laptop. 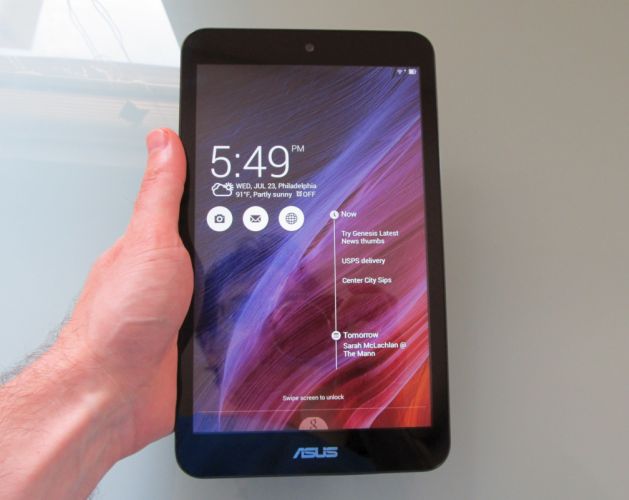 Still, the MeMO Pad ME181 feels zippy, has no problem running any app I’ve thrown at it, and costs less than a Google Nexus 7 or Amazon Kindle HDX.

Does that make the Asus MeMO Pad a must-buy? That depends. Some folks may be underwhelmed by the screen resolution, amount of RAM, or other specs. The ZenUI software Asus piles on top of Google Android could also be a turn-off for some, although it does add a few handy features. Asus also offers a 7 inch model with similar specs for $50 less.

Still, there’s a lot to like about the Asus MeMO Pad 8, and I’ve enjoyed using it for the past few weeks while working on this review.

Asus has been making Android tablets for years and even designed the Nexus 7 tablets with Google in 2012 and 2013. Up until recently most of the company’s tablets have been powered by ARM-based processors. 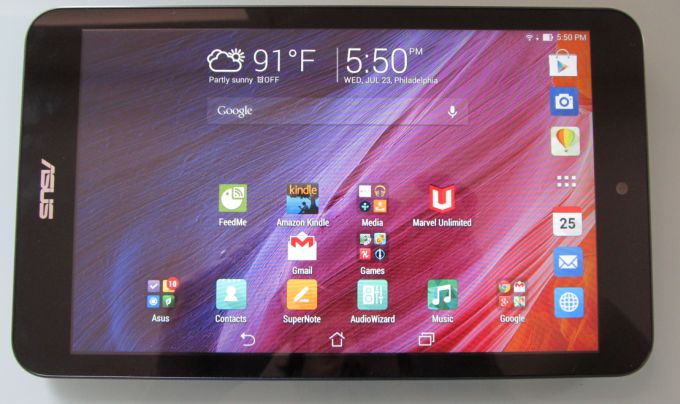 In mid-2014 Asus launched a series of tablets with Intel Atom Bay Trail-T processors including the MeMO Pad 7, MeMO Pad 8, and Transformer Pad TF103. These are all priced as mid-range tablets and they lack some of the features you’ll find in more expensive models such as full HD displays. But based on my tests, Intel’s quad-core Atom chip is more than fast enough to handle just about anything you can throw at it. We’ll delve into a bit more detail in the performance section below.

The tablet comes in black or white, and the case features rounded corners, relatively thin bezels on the sides of the screen and slightly thicker bezels at the top and bottom.

It measures 8.5″ x 5.4″ x 0.33″ and weighs about 0.7 ounces. It’s not quite as pocket-sized as some 7 inch tablets, but given the right pair of jeans you can probably stuff the tablet in your back pocket while you walk around the house (I wouldn’t recommend leaving the house with the tablet in that pocket… or sitting down with it there, for that matter). 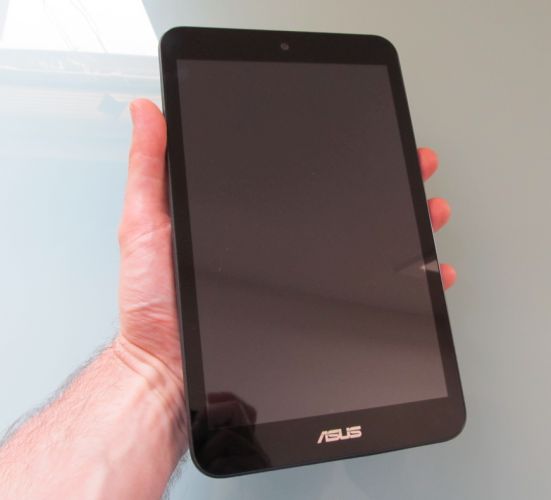 The tablet has stereo speakers which are reasonably loud for a device this small. But both speakers are positioned along one edge which means that you’ll be hard pressed to notice a stereo effect if you’re holding the tablet in landscape mode. The speakers also face the back of the tablet, so you may end up covering them with your hand while holding the device. 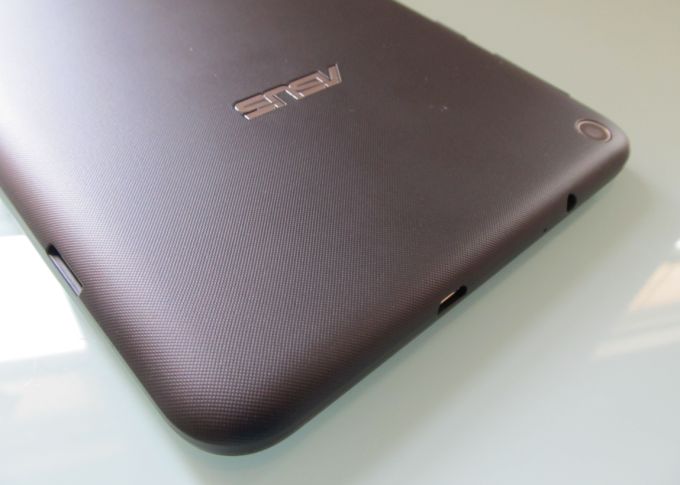 On the right side of the tablet you’ll find power and volume buttons. The power button is below the volume keys, which I find a little disconcerting since I’m used to the Nexus 7 which has a power button on top. But assuming you don’t plan on using a whole bunch of tablets in your household you should have no problem getting used to the button layout.

There’s a microSD card slot on the other side of the tablet and the headset and microUSB charging ports are at the top.

There are cameras on the back and front of the tablet, and the rear camera features auto-focus support. But neither camera has an LED flash.

One basic feature that’s missing from the MeMO Pad 8 is an ambient light sensor. You can adjust the brightness manually by using a slider in the Quick Settings panel, but it’s a bit disconcerting to encounter Android apps like the Amazon Kindle app which have a check-box for “auto brightness” on a device which can’t actually support the feature. 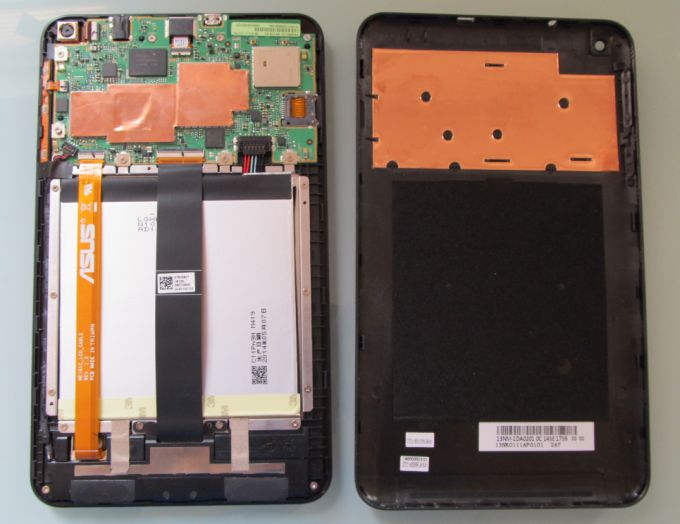 Asus ships the MeMO Pad 8 with Android 4.4 KitKat and it comes with the Google Play Store. You’ll be hard pressed to find any Android apps that won’t run on this tablet.

But it also features the Asus ZenUI experience which means that it has a custom app launcher, settings menu, Quick Setting and Notification panels, and a few custom apps. Some of those features are useful. Others… not so much. 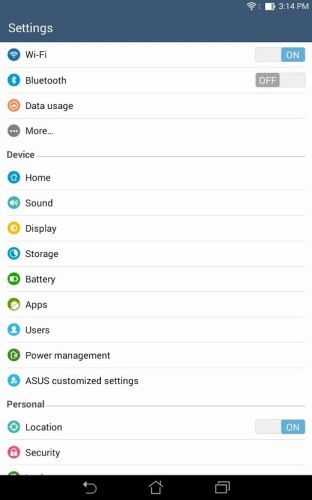 I’m not generally a fan of custom skins for Android since they have a habit of creating an inconsistent user experience as you flip between apps that were designed to match Google’s design guidelines and apps and menus that were developed by Asus (or HTC, or Samsung, or whoever). But there are a few things to like about ZenUI. 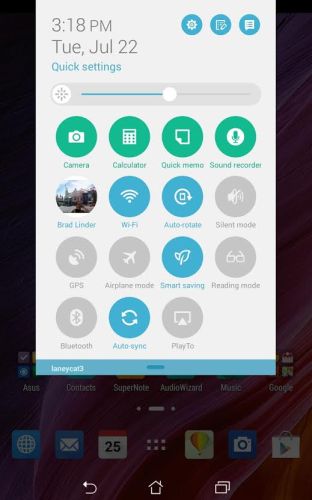 For one thing, the Quick Settings pull-down panel is customizable. Don’t need to toggle auto-sync or auto-rotate very often? Just uncheck their boxes from the Quick Settings options. Unfortunately there’s no way to change the list of always-present apps in the panel which means you’ll always see Camera, Calculator, Quick Memo, and Sound Recorder icons… whether you use these apps or not. 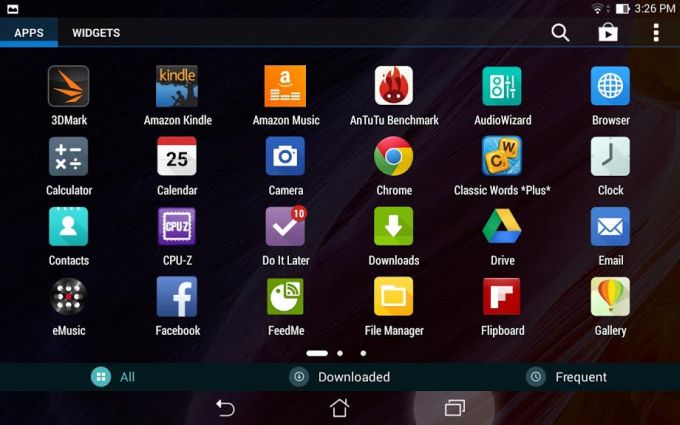 The Asus app launcher is also kind of nice. It looks a lot like the stock Android app launcher, but there are tabs for All apps, Downloaded apps (which you’ve installed yourself), and Frequent for the apps you use most often. 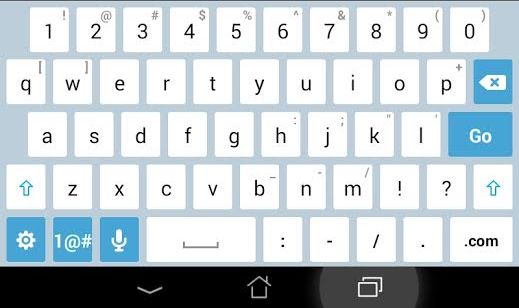 The tablet includes an Asus Keyboard app instead of Google’s keyboard. It has a dedicated row of numbers above the letter keys, auto-suggests words as you type, and works reasonably well for entering text. If you’d prefer an alternate keyboard such as Swype, SwiftKey, or even the Google Kelyboard you can always install one from the Google Play Store. 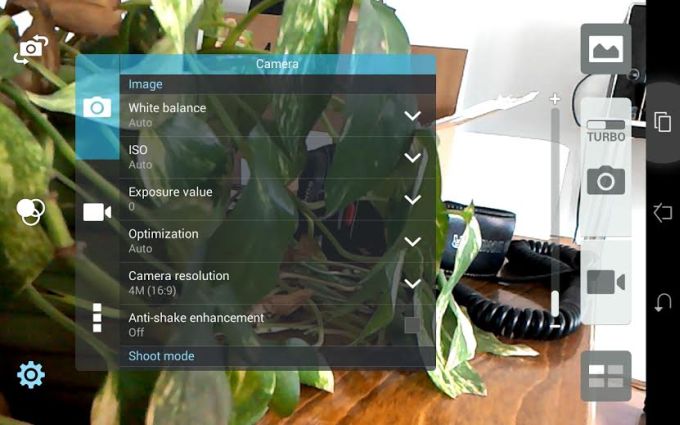 Asus includes a camera app that has a few nice features including an anti-shake option. But the front and rear cameras on the MeMO Pad 8 aren’t all that good… and no software’s going to change that. Don’t throw out your DSLR just yet. 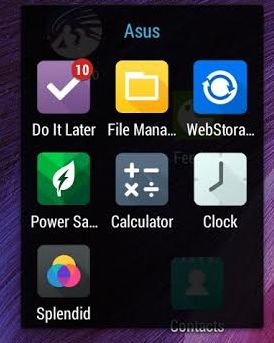 Other apps include a custom calculator, a Power Saver app, an Asus Web browser (the tablet also comes with Google Chrome) and third-party apps including Zinio, Flipboard, Amazon Kindle, and eMusic… because who doesn’t love a little bloatware?

Sadly, there’s no way to remove apps that come pre-loaded on the tablet unless you root your device, but at least you can disable them so they won’t show up in your app launcher.

A few years ago there were many apps that simply wouldn’t run on an Android tablet with an Intel processor. These days a tablet like the MeMO Pad 8 can run the vast majority of Android apps — even those that weren’t originally designed for x86 chips. While apps that have to be translated may run a tad slower and use a little more battery life, the difference is negligible — and the most important thing is that you’d have to look pretty hard to find an app that you can’t run on this tablet. I didn’t encounter any at all during my tests. 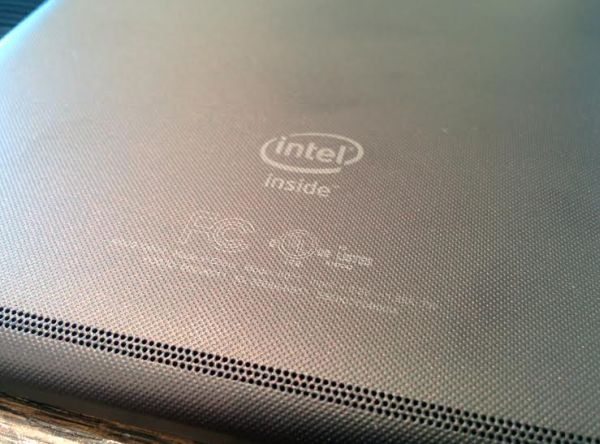 Intel’s Atom Z3745 is a 1.33 GHz quad-core Bay Trail processor that launched in 2013. While many of the first devices to use this chip were Windows-powered tablets, Intel has been pushing its Bay Trail chips as solutions for Android tablets as well… and the MeMO Pad 8 is just one of several Android tablets Asus has launched this summer that feature the chip.

So how does a tablet with Intel’s chip stack up against one with an ARM-based processor? Pretty well. 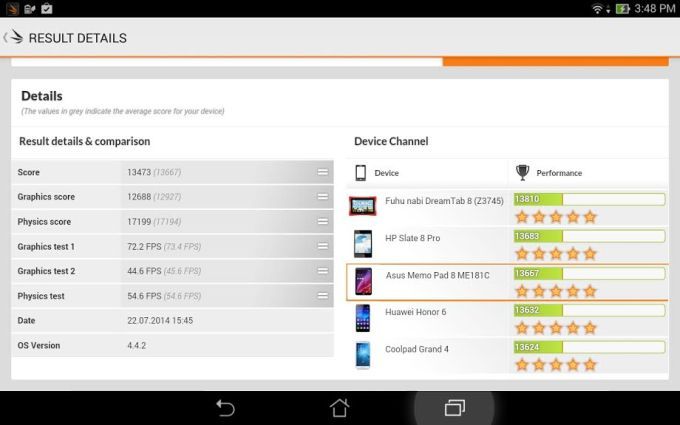 Benchmarks don’t always paint a complete picture, but after using the tablet for a few weeks these results don’t surprise me. The MeMO Pad 8 feels pretty zippy, boots and loads apps quickly, and never struggles with games, HD video playback, or other common tasks. 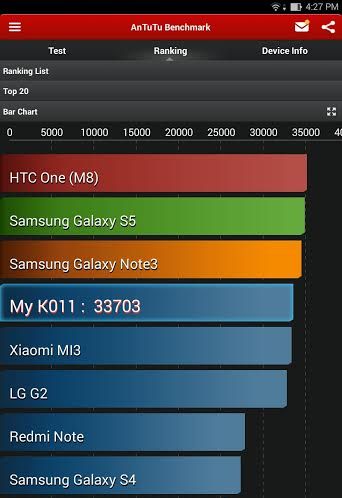 Not only does the Asus MeMO Pad outperform the 2013 Google Nexus 7 in all of the benchmarks I ran, it gets similarly long battery life and standby time. That’s despite the fact that the Nexus 7 has a $229 list price and 2GB of RAM compared with the MeMO Pad 8’s $199 price tag and 1GB of RAM.

The Nexus 7 does have a higher-resolution display, automatic screen brightness, front-facing speakers, dual-band WiFi, and performance that’s still plenty fast. So if I were going to choose between the two tablets, I’d probably choose the Nexus 7 — especially since you can often find it on sale for far below the list price. 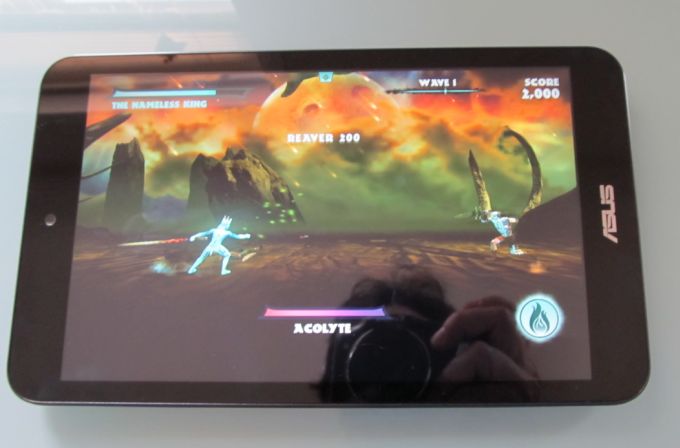 But it’s noteworthy that an Intel Atom-based tablet is so competitive. It’s also worth noting that Asus offers a 7 inch MeMO Pad 7 with the same processor and nearly identical specs (but lower-resolution cameras) for $150. 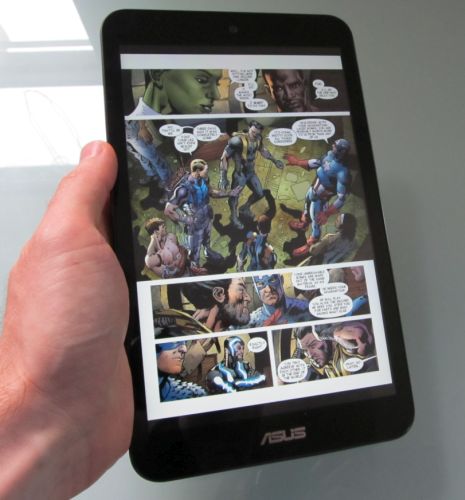 The tablet’s IPS display has wide viewing angles and I never felt like I had to hold the tablet at a specific angle in order to see images or videos clearly. While some fans of high-res displays might dismiss this tablet because it doesn’t have at least a full HD screen, most of the time I could barely tell the difference between the 1280 x 800 pixel display on the MeMO Pad 8 and the 1920 x 1200 pixel display on my Nexus 7. 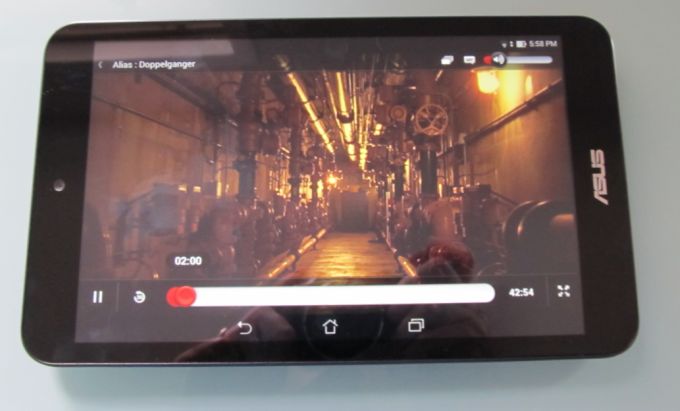 Asus says the MeMO Pad 8 should get up to 9 hours of run time thanks to its 15.2 Whr battery. I never tried using the tablet for 9 hours at a stretch, but I regularly used it to read eBooks or surf the web for a few hours, put it down for a day or two, and picked it up to use some more without it running out of juice. 9 hours certainly seems plausible.

The Asus MeMO Pad 8 ME181C tablet offers solid performance and a reasonably low price tag. While it doesn’t have a full HD display or a high quality camera, I don’t think either of those things are must-have features for an 8 inch tablet that sells for under $200.

On the other hand, it’s a bit disappointing that the tablet lacks an ambient light sensor and while the Asus ZenUI software has a few nice features I generally prefer Android without any custom skins. 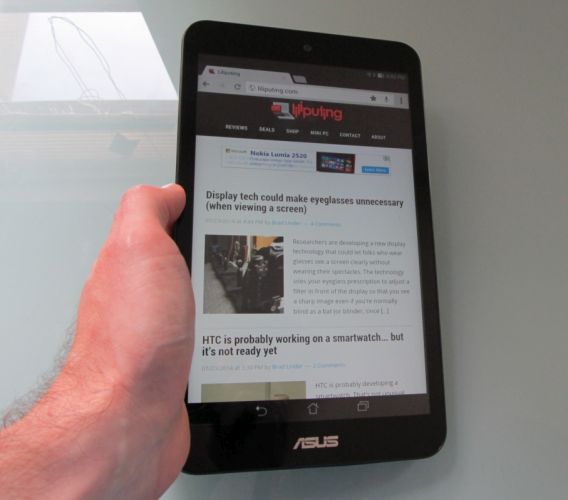 But while I’d probably still recommend a Nexus 7 (2013) over the MeMO Pad 8, this tablet shows that Intel has essentially caught up with ARM-based chip makers in the low-power, high-performance mobile processor space. If the Nexus 7 didn’t exist, I would have no problem recommending this tablet instead.

In fact, knowing that Asus offers a 7 inch model for $50 cheaper, I find myself kind of wanting to recommend that model even though I haven’t had a chance to test it myself. If the MeMO Pad 7 ME176C  offers the same level of performance as the MeMO Pad 8, it’d be a steal at $150 or less.